Awards Daily has a list of 11 films that they consider to be the only viable Best Picture contenders, and it's an admittedly weak group. Nothing like last year.
As far as probability goes it's pretty solid, although I would swap out Rachel Getting Married for Australia. Rachel seems more destined for acting and writing nods (which it certainly deserves), despite what Roger Ebert's "Deep Vote" says. Also, WALL-E should at least be considered in the running, even if it doesn't really seem like a final five pick. 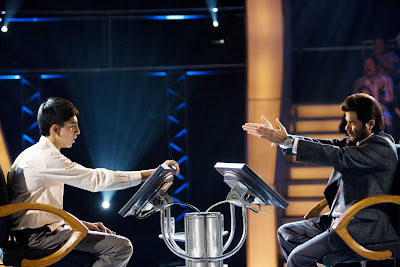 Dev Patel and Anil Kapoor in a scene from Fox Searchlight's Slumdog Millionaire.

I think right now the strongest contenders are Slumdog Millionaire (which I see on Monday), The Curious Case of Benjamin Button, and Revolutionary Road. Who gets the other two slots is anyone's guess. I've heard strong arguments for The Dark Knight (which I still don't buy, but am beginning to warm up to), Frost/Nixon, and Gran Torino, but each comes with caveats that are hard to ignore. Perhaps in a year like this there could be room for some left field surprises.

It's still a long way to go to nomination time. Anything could happen.
Email Post

Dead Pan said…
I'm sad that Synecdoche isn't even in contention.
10:31 AM