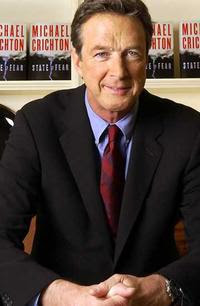 Michael Crichton -- whose books were made into such eventful Hollywood films as "Jurassic Park," "Disclosure" and "The Andromeda Strain," -- has died after a battle with cancer. He was 66.

"Michael's talent outscaled even his own dinosaurs of 'Jurassic Park,' " said Steven Spielberg, who directed the first two "Jurassic Park" films in the '90s. "He was the greatest at blending science with big theatrical concepts, which is what gave credibility to dinosaurs again walking the earth."

Michael Crichton was a fantastic authors whose works have spawned some fantastic films, most notably one of the landmark achievements of the 1990s - Jurassic Park. He will be missed.
Email Post

Anonymous said…
Sad news indeed. He made many literary contributions to the culture. He left too soon.
2:35 PM