Not by name of course, but check out Ebert's list of rules for film critics, which comes after the uproar over his reviewing a film that he only saw eight minutes of (a controversy I have somehow managed to not hear about until now). 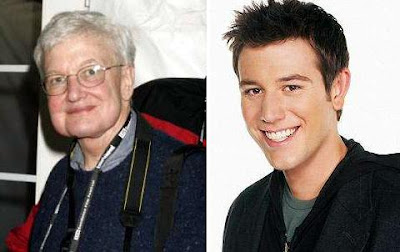 Ebert has several zingers aimed directly at Ben Lyons, who took over his spot on At the Movies, like this one:

Keep track of your praise. If you call a movie "one of the greatest movies ever made," you are honor-bound to include it in your annual Top Ten list. Likewise, for example, if you describe a film as "the most unique movie-going experience of a generation," and "one of the best films of 2007, and of the last 25 years," it's your duty to put it in the Top Ten of 2007. This is doubly true if you have published two separate lists naming 14 of the year's top 10 films.

Beware of verbal parallelism. Never make a statement such as, "I like women in real life, but I didn't like 'The Women'." Readers may write you sharing that they loved "JFK," but they fly out of O'Hare.

A trailer is not a movie. Thus, when urged to select your "picks of the week," you must never pick a trailer for an upcoming film. You must actually wait to see the film itself.

Each one being something Lyons actually did. Of course, Ebert is far too classy to call Lyons out by name, but the critique is direct, spot on, and razor sharp.

Lyons has become something of a joke and critical punching bag lately, but for the most part its entirely deserved. Erik Childress' Criticwatch has made a feature out of the Ben Lyons Quote of the Week, where you will find Lyons gems like:

“It’s really important to tell people to go out and see W. so they can talk about it and have an opinion about it and this freedom of speech of course that allows us to go and talk about a film about a current sitting president.”

No wonder film criticism is dying. Thank you Ebert for laying the smackdown as only you know how.
Email Post

Anonymous said…
Haha, Lyons, Jr. is a real chip off the old block, except much, much worse.
9:32 PM

Anonymous said…
Lyons is a complete fool, and a disgrace to valid criticism. Ebert was right to call him out, and equally right to make that list of suggestions, which will probably be ignored. Throwing the word masterpiece around is of course a major bone of contention in this field, as well as not following up with early praise on best lists.
11:12 PM

"Roger Ebert is smarter than us all."

K. Bowen said…
The only film I've ever called a masterpiece in the initial review was The Assassination of Jesse James. Generally, a week's thought is too little.

I did once call, of all things, The Invasion a flawed masterpiece, pointing out how difficult it can be to write about a film that's intelligent but deeply flawed in execution. But I certainly wouldn't call it a masterpiece.

To be honest, though, I think Ebert hands out four star reviews to films that don't end up on his top ten list.
12:44 AM

Matthew Lucas said…
That's true, Ebert does hand out 4 star reviews like candy on Halloween these days, but his contributions to film criticism are undeniable. Lyons isn't even worth to lick the dirt off his shoes.
2:05 AM

Matthew Lucas said…
I don't use that word often either, but I called THERE WILL BE BLOOD a masterpiece, and I don't regret it a bit.
1:38 PM

Dead Pan said…
To K. Bowen- Ebert also has a blog up about his handing out of 4 star reviews. You should read that.
10:29 AM

Marilyn said…
Is it absolutely necessary to call works masterpieces? Time usually makes that call, not critics of the moment. I prefer referring that judgment to future generations. I've seen too many works reviled in their time become the art that endures and darlings of the day fade before the new year tolls.
11:51 AM

Thomas Pluck said…
Ha! thanks for pointing out that Ebert was mocking Lyons with these "helpful hints." Lyons sounds like a complete tool. I'd been blissfully ignorant of his blockheadedness until now. He sounds like someone Fred Willard would play in a Christopher Guest film.
5:57 PM