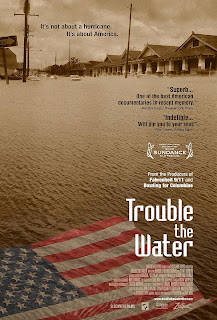 When Hurricane Katrina hit New Orleans in 2005, the only people who didn't seem to understand the gravity of the situation was the United States Government. The category 3 storm made landfall in New Orleans on August 29, 2005, breaching the city's levees and flooding more than 80% of the city, killing thousands and displacing tens of thousands more. It was destruction on a Biblical scale, a disaster that we were woefully unprepared for. America sat glued to its television screens as one of its most venerable cities sank beneath the vengeful waters of Mother Nature.

But for all of the round the clock news footage and on the scene reports, there is one thing that the reporters consistently failed to capture - the personal side of the tragedy. No number of human interest stories can amount to the tale as told by the the people who lived it as it was happening, and that is just what Trouble the Water, the new documentary by Carl Deal and Tia Lessin, does.

Culled from the home videos of Kimberly Rivers Roberts and her husband Scott, two poverty-stricken, aspiring rap artists living in New Orleans, Trouble the Water paints a unique and deeply intimate portrait of a national disaster and the bureaucratic failure of the government to do anything about it. 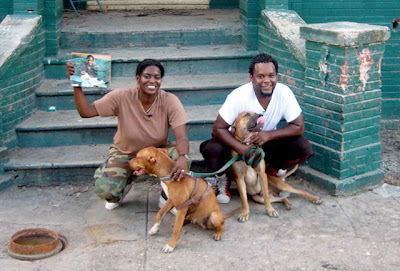 Unable to afford transportation out of the city, Kim and Scott hold their ground, and end up trapped in their own home with their family and neighbors, surrounded by water and cut off from the rest of the world. Through Roberts' eyes we see the hurricane make landfall, and even more devastating we watch as they fall through the cracks of a system totally unprepared for a disaster of that magnitude. Kim puts a human face on the suffering of New Orleans, but also on its resilience as well. Her determination and her strength are a testament to the human spirit, even as we witness the height of human failure around her.

There are no words to accurately describe the kind of tragedy where elderly hospital patients are left behind to die, where governments do not use every resource at their disposal to evacuate its citizens from certain death, where displaced citizens are turned away from nearly empty military bases at the point of an M-16, and where incompetent leaders are rewarded for their efforts (disgraced FEMA chief Michael Brown, the credits inform us, is now a disaster management consultant and motivational speaker). I can't even begin to wrap my brain around what these people went through, and how grossly mishandled the situation was, and in many ways still is today. How do you justify rebuilding a city's ritzy tourist spots, when its poverty stricken areas are still in ruin three years later? 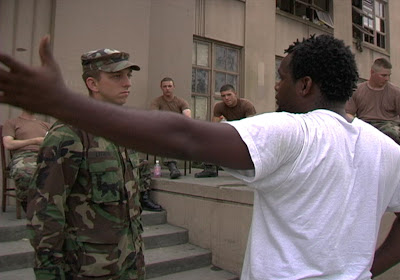 The filmmakers never try to answer that question, nor do they offer any solutions. Their goal instead is to place a human face on the tragedy rather than push for any agenda other than the fact that this cannot be allowed to happen again. It is impossible to watch this film and not feel some degree of outrage. The film itself tends to become unfocused in its later half, losing sight of the tragedy at hand and veering off into unnecessary explorations of Kim's burgeoning rap career (whose music can be a bit inappropriate for the desired mood), but that does not diminish the overwhelming power of its subject and its stark indictment of bureaucracy gone wrong.

Trouble the Water may not be the essential film about Katrina, it may not be the definitive statement of the horrors that befell New Orleans in August 2005, but there is something unique and indeed quite moving about seeing the tragedy from the perspective of those who survived it, who lived it and saw it for what it was. It invites us to step into the shoes of people who the government forgot, and demands that we refuse to do the same.

Anonymous said…
Matthew, I must tell you that this is a fabulous review. I saw this film about two months ago and reviewed it myself, and even was lucky to get ten minutes with the affable filmakers. I agree that the film is noteworthy because of its "perspective" coming from those who survived, particularly the courageous woman at the center.
Your paragraph beginning with "There are no words to accurately describe the tragedy..." is magnificent, if disturbing. The points you bring out concerning hospital pateients being "left behind," "the non evaculation" of others that leaves them to the mercy of this punishing calamity, and the "rewards" given to those who exhibited gross incompetance, are all appalling beyond measure. The fact (as you bring out) that the poverty-stricken areas continue to remain in "ruins" is a testament to one of the worst-handled disasters in American history.
I agree with your rating completely (the film is no masterpiece) but it's a stark reminder of the ills of society that continue to malign issues of such vital significance.
This review really examines this film witha magnifying glass.

Matthew Lucas said…
Thank you Sam. Coming from you that means a lot.
7:41 PM

Craig Kennedy said…
You're right Matthew, this doc really put a human face on for what most peole is a kind of abstract tragedy.

I guess I disagree a little about the film's shift in focus. Kim's rap career was such a huge part of her personal motivation. The scene where she discovers the CD she'd burned she thought had been lost and she breaks into an impromptu version of one of her raps was pretty moving.

My favorite thing about the movie is how matter-of-fact Kim and Scott were. Instead of wallowing in their anger, they just set about making the best of their situation for themselves and for those around them.

Having said that, I don't think it's a perfect doc either. For other reasons, it DID feel a little ill-focused like you say.
1:06 PM

Matthew Lucas said…
The unfocused nature was probably the biggest drawback of the film for me, but at the same time I understand that it really couldn't have been helped, considering the obviously scattershot nature of the footage Kim shot. Nothing against her or what she achieved, but there's only so much you can do with amateur home video, especially in the conditions she was shooting in. The filmmakers did an excellent job with what they had, turning all that random footage into a cohesive whole. It wasn't just the rap stuff I found off track, but once they make it back to Tennessee the movie seems to lose focus a bit. Still though, it doesn't draw away from the innate power of the material.
6:47 PM

Anonymous said…
My screener just arrived! Not sure when I will watch it, but I will. Yay!
9:31 AM

Gargantuan Media said…
The photo of the black dude gearing up for left handed bitch slap at the soldier is flat out inflammatory. It really looks like he's about to hit that Guardsman. Is that what you mean about citizens being turned away at gun point?

Documentary film is a great genre, and I'll be sure to screen this one, but this scene seems to suggest that a young man is about three and half seconds away from eating Army issue lead
after he strikes that soldier. Is he crazy enough to attack people that are deployed to specifically to save his city? That seems very irrational or worse staged for the cameras.

I agree that this whole disaster and reponse has been a joke. It's still the 3rd world down there - half the police force gone for good and whole neighborhoods rotting. I can believe that the film maker wants to provoke his audience and show the rage of people stuck in the flood and bureacracy by showing the most vocally outraged citizens left in the wake of Katrina. That comes across pretty well.

My question for the audience of this documentary is how is a real need for help for those elderly, physically challenged or too poor to leave the city being expressed by focusing the narrative on someone foolish enough to wave his hands around at people trying him?

Anybody making a disaster situation worse by getting crazy with soldiers deployed to save the city is not helping anyone. This particular scene seems staged in way that would even make ambush interview ace Michael Moore blush.

More to the point, it's disrepectful in the extreme to anyone who wears a uniform in New Orleans to have to shoulder the blame when they are repairing levys, filling sandbags and searching for survivors in a disaster that has almost no modern parallel save for the Mississippi Flood of 1927.

Both sides, military and civilian, can and must do better. Hurricanes and floods are a fact of life for those who live in the South. We must learn to respond, not with the counter-productive and implied threat of violence, but as Americans fighting a disaster - not eachother.
5:18 AM