OK so here's the thing. I think it's safe to take Australia off the Best Picture lists. I think it's almost certain to be recognized in at least some of the art/tech categories, like Score, Cinematography, Art Direction, and Costume Design...but it's just not Best Picture material. 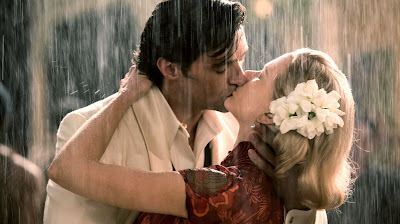 I liked it, I really did. I was caught up in Luhrmann's glorious vision and I cried in all the appropriate places. Few other directors can make my heart swell like he can. But there are just too many problems here for me to ignore.

First (and most glaring), Australia is way too long. There is no way to justify its nearly 3 hour running time. Some films, yes. This one, no. Because it's basically two different films combined into one. The first is a Western about land disputes and cattle drives. The second is a historical war drama. The films are almost equally divided and complete with their own different tones. They work on their own terms, but don't really mesh together very well. It has almost as many endings as Return of the King...every time it feels like it's coming to a natural conclusion, it keeps going. Restraint isn't exactly something Luhrmann is known for, but Australia's extravagant length is its Achilles heel.

It also has trouble finding a tone at first, teetering between serious historical epic and absurdly comedic, threatening to veer into some of the more zany moments of Moulin Rouge, but thankfully it never does. Nothing against Moulin Rouge (it's one of my favorite films), but that would have been totally out of place here.

It is a grand tale against a sweeping backdrop, appropriately rousing and emotionally stirring. But the entire production feels bloated. A little bit of editorial (and screenwriting) restraint could have gone a long way into making Australia a truly great film.
Email Post

Anonymous said…
Yeah, I've heard that one a bit recently, that it just isn't as "great" as hoped. Too bad. But I am glad you liked it, I know JD loved it, and I am sure I will like it too. It will still probably be the most beautiful film of the year, visually anyway.

As soon as the [belated] prints of the film arrive in SA, I will attend the premiere of the screening, and they want us to dress outback casual, and I don't know what that really means. You think they would mind if I turned up in a replica dress of what Kidman is wearing there? Just to show they how a premiere is really done?
2:59 PM