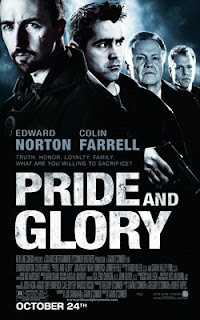 Judging by the jaw-droppingly unfair 35% positive rating on Rotten Tomatoes, one would expect Gavin O'Connor's Pride and Glory to be a much worse film than it really is.

True, it begins as a fairly routine crime procedural/cop family drama, as a family of police officers becomes embroiled in a department scandal when the murder of four officers during an apparent botched drug bust is revealed to have internal ties to the department. But by the end O'Connor has achieved something that, while not quite extraordinary, is still quite notable for the tension it builds and its powerhouse payoff.

For the Tierny family, honor and loyalty are everything. Irish pride flows strong through their veins, and their lives have been dedicated to the NYPD - from family patriarch Francis Sr. (Jon Voight), to his sons Ray (Edward Norton) to Francis Jr. (Noah Emmerich), to his son-in-law Jimmy Egan (Colin Farrell). But their ethics and notions of loyalty are challenged after the fateful raid when each is faced with his own internal dilemma, fueled by their own unique interests. For Papa Tierney, it is loyalty to the force above all, to Ray it is justice, to Francis it is the interests of the men under his command, and for Jimmy it is preservation of himself and the welfare of his family. As each goal collides with the others, the prime aspirations of pride and glory seem ever farther away. 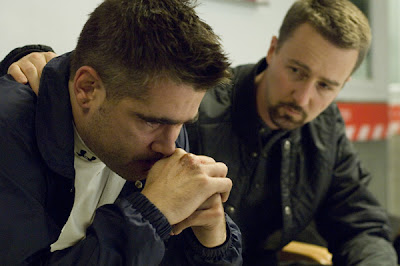 O'Connor lets the film get bogged down in the typical trimmings of his genre, losing steam and dragging through the exposition and emotional hand-wringing of macho men dealing with their manly inner demons. To be quite honest I couldn't have cared less about any of it - we've seen it all before and it's dull. Men and their testosterone fueled problems never seem to branch out in Hollywood, and it's the same in Pride and Glory for quite a while. But then about halfway through, O'Connor kicks things into high gear, and an emotional intensity fuses with the gritty atmosphere and builds to a shattering climax that acts as a much needed roundhouse kick to the head.

It has long been noted that ending a film well is the most important thing, because if a film begins poorly but ends well, then an audience is more likely to like the film than if the situation were reversed. That could very well be the case for me here, as Pride and Glory's first half is admittedly weak. But the cast is all in top form (despite Farrell's uncharacteristic hints of his Irish brogue sneaking in amid his New York accent...which may or may not have been intentional). The real standout here is Jennifer Ehle in the underused role of Francis Jr's cancer-stricken wife, Abby. The character may be underdeveloped, but Ehle adds layers of emotional depth above and beyond the call of the script, and her efforts are duly noted and hugely appreciated. 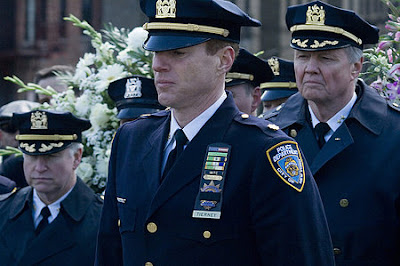 The men all do their fair share of emoting as well, and are all quite good. The strength of their male pride juxtaposed with the stark irony of the words "FINEST" emblazoned on their casual clothing serves to underscore the themes of the price of unchecked power and loyalty at the cost of justice. It's also a tale of men drawn between two families - their blood family and the NYPD. Never is this more clear than in the film's final act, when O'Connor delivers his last minute emotional blow that lifts the film out of mediocrity and into the level of something far more respectable.

Pride and Glory is neither a great film or the greatest cop drama, but I respected the hell out of it for what it ultimately achieves - a sense of honor in a dishonorable and morally dubious situation where the right thing isn't the easiest thing, without being false or cloying. And that is an impressive feat indeed.

Anonymous said…
Hopefully I see this soon, I love me some Farrell and it sounds like this is as good as I thought it might be - thanks for comfirming my thoughts that this wouldn't suck!
12:16 AM

Matthew Lucas said…
It indeed does not suck. It has it's flaws, but I found myself enjoying it by the end.
1:30 PM

Anonymous said…
I have indeed seen the very bad reviews, but it's nice to know you saw some good in it. The review is well-written (and argued) and it does deserve to have its day in court.
1:38 PM

Craig Kennedy said…
There's a facism to Rotten Tomatoes that I don't like. I think people take the Tomato Rating too literally without thinking about what it's really saying.

It's a little like the electoral college that boils down a whole state's popular vote into one Red or Blue decision. Ok, that metaphor sounded much better in my head. Ah well...

I skipped this one because I just don't have room on my plate right now for another cop drama, but I'm glad to hear it's better than advertised. I'll definitely keep it in mind for DVD.
1:46 PM

Matthew Lucas said…
Thanks Sam...I would be interested in hearing your take on this.

Craig, it's definitely a tired subject, but I think it's worth a look. Rotten Tomatoes can be a bit unfair, especially in it's treatment of movies with around 50% as rotten...that just means the consensus is split evenly an can go either way. I still respect the site, and the idea that I will have my own official critic page in February when I join the Southeastern Film Critics Association gives me a bit of a thrill...it's still kind of an arbitrary thing. Metacritic probably has a better system with its graduated ratings, rather than just "Fresh" and "Rotten."
12:45 AM