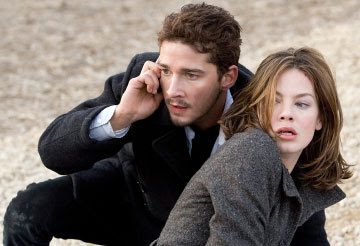 However, the second act is quite a bit better than the first. Caruso slows down with the lightning-paced editing and begins focusing on the characters and the source of the deadly instructions, turning the film into an allegory of sorts for the dangers of unchecked government surveillance. If his villain bears a striking resemblance to HAL of "2001: A Space Odyssey," it speaks to the unimaginative weaknesses of the film - a narrative shortcut that still leaves open many questions and stretches its credibility to the max.

We agree that the film is mostly a modest success, but I found the third act perhaps the most problematic, just because the story had almost boxed itself in a corner by that point. (In other words, it had become much more predictable.)

However, I did enjoy it: It was exciting and the supporting turns gave it a solidity that at times outshone the two stars (though LaBeouf is quite good in his role).
2:01 PM

Matthew Lucas said…
I agree about it becoming more formulaic, but I think that's part of why it works better, because it seems more surefooted. It trades creativity for solidarity, which is a double edged sword.
6:48 PM

Anonymous said…
OK, I just read the full review at The Dispatch. Very well written, structured and reasoned. As I commented at Alexander's site, I was startled at his reaction, but your own position isn't too far off. But to be honest I didn't see the film. My wife and kids did, but I opted to stay home blogging that afternoon. LOL! I guess I have no choice but to check it out.
2:59 PM