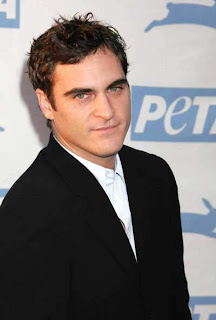 Joaquin Phoenix, who turned 34 years old just yesterday, stunned E! Online reporter Jason Kennedy with the announcement that he would be retiring from acting. The two-time Oscar nominee stated this on the red carpet at a Monday benefit for the Association of Hole in the Wall Camps, a charity founded by Paul Newman.

Phoenix said that "Two Lovers," his upcoming romantic drama with Gwyneth Paltrow and Vinessa Shaw, will be his final on-screen role.

Crazy...he says he's "dead serious" but we've heard this from people before, and they rarely go through with it. Only time will tell.
Email Post

Anonymous said…
Jeez, that's hard to believe, and not something that happens very often. Yeah, I remain skeptical as well........
2:10 PM