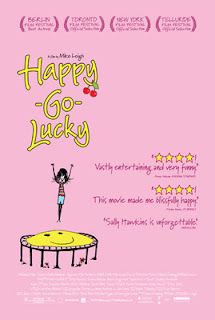 I'll admit I've been very torn over Mike Leigh's Happy-Go-Lucky ever since I saw it nearly two months ago. It's hard to deny that there is something light and refreshing about Leigh's deft direction and positive outlook, but there's also something ingratiating and a little off-putting.

Some (i.e. Jeffrey Wells), have attacked the film for its "emotional fascism," but I think that is an oversimplification, albeit not too far off the mark. In a way it describes why the film bothered me, but as Mike Leigh pointed out, misses the point.

The film centers around Poppy (Sally Hawkins), a bubbly, perpetually sunny kindergarten teacher who goes through life with a indefatigably positive outlook. Her happiness is so strong and so infectious that it effects everyone around her - but not always for the better. As she bounces through life, she encounters people whose outlooks swing in the complete opposite direction, including her perpetually miserable, sternly religious, and virulently racist driving instructor, Scott (Eddie Marsan), whose deep seeded anger is brought to the boiling point by his dealings with Poppy, who has finally met the one person who mere happiness cannot cure. 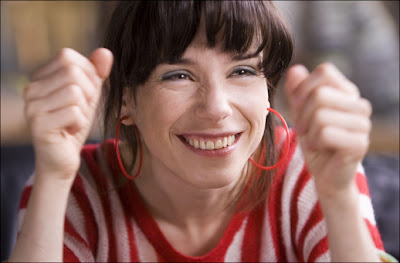 To be honest, for most of the running time I was annoyed by Poppy. I found her childish, irresponsible, and reckless, the kind of person who would drive me crazy in real life. She doesn't seem to take anything seriously, and treats every serious statement with a cute, sing-songy retort. She almost doesn't seem to be living in the real world, and Hawkins seems to play her as the one note smile machine she comes across as.

But then Leigh does something unexpected and welcomed...he gives Poppy a human side, a sense that there is more to her than her sunny exterior, a sadness beneath the surface, and at long last we see Hawkins' performance for what it is - a remarkable hat trick. Her performance seems one dimensional because Poppy appears one dimensional at first glance, and that how many (Scott most of all) perceive her. But Poppy's positivity stems from a true desire to brighten the days of those around her, to help in any way she can. She is in some ways, as Leigh rightly points out, an extension of the central character in Leigh's last film, Vera Drake. The tones are vastly disparate, but both characters share an almost obsessive need to help anyone in any way possible, and in both instances, they find that their "help" can come back to haunt them. 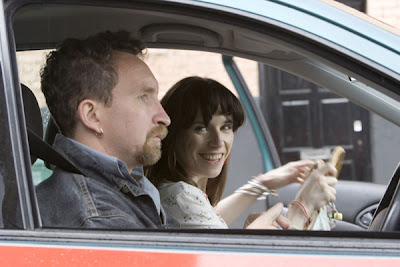 Unlike Vera Drake, however, the tone of Happy-Go-Lucky is ultimately a positive one. Leigh's confident direction and the mostly improvised performances of the cast (a Leigh trademark) offer a breezy and charming experience. It may seem maddening at first, and indeed I found myself hating Poppy on more than one occasion, but it eventually settles into a groove and once you get used to it, it becomes much more tolerable. Leigh is neither blanketly endorsing or condemning his protagonists actions, nor is he making a statement as simple as some, myself included, may have initially thought. Happiness for happiness sake is fruitless and ultimately as empty as Scott's self-made miserablism.

There is a lot more going on here than initially meets the eye, even more than I initially gave it credit for. It is not Leigh's best work - it seems almost inconsequential when compared with his masterful Vera Drake - but you have to respect what he has achieved here. Happy-Go-Lucky has an almost wistful charm to it, a kind of bated optimism in a cold and cynical world. It is a film that, while most certainly flawed, can't help but bring a smile to the face, and maybe, just maybe, a little something more.

Anonymous said…
Well, I am very glad that we are actually on the same wavelength in terms of this film, even if I like it more that doesn’t really matter, right now, I’m happy :)
1:04 AM

Anonymous said…
I also was rather annoyed by Poppy, but all in all I liked this a little bit more than you did, and found it a refreshing change of pace for Mr. Leigh, whose VERA DRAKE as you rightly imply was an intense experience.

Ironically, I saw the film on a U.K. DVD that was sent to me (and arrived) yesterday, so I watched it last night! LOL.

You really did a great job with this review, it's terrifically comprehensive and an excellent piece of writing.
12:40 PM