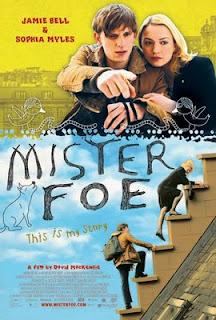 Hallam Foe is a troubled young man. Ever since the death of his mother by apparent suicide, Hallam (Jamie Bell) has withdrawn into the tree house his father built him as a child, content to watch the people around him rather than going out in the world and living. He becomes a spectator to the sport of life.

Things begin to go wrong however, when he begins to suspect his stepmother (Claire Forlani), his dad's former secretary, of murdering his mother. No one believes him of course, and as his stepmother becomes increasingly insistent that he move out of the house and out on his own, Hallam runs away to the city to try and start a new life.

He takes with him his voyeuristic habits, which lead him to Kate Breck, a beautiful HR manager with whom he becomes immediately infatuated because of her uncanny resemblance to his mother. Hallam takes a job at the hotel she works for, and as the two are drawn closer together, the bizarre, Freudian overtones of their relationship become more pronounced, forcing Hallam to confront his demons, and the specter of a past he has yet to come to terms with. 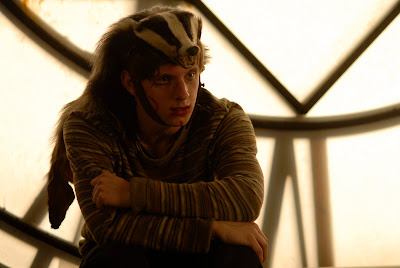 It all sounds a bit heavy and lurid, but director David Mackenzie isn't so much interested in the bizarre sexual nature of his narrative as he is the peculiar quirks of the characters he observes. Mister Foe invites the audience to be the voyeur, stepping into Hallam's shoes and watching the world as if through a glass, as the story unfolds in its own unique, crystallized space in time.

Nor does Mackenzie spend too much time probing the depth's of his characters' psyches. Any person who dresses in their dead mother's clothes, smears his face with her makeup, and has sex with a woman who looks just like her that he has been spying on for weeks obviously has some serious issues that any psychiatrist worth his salt would have a field day with. But that is not the point here. Mackenzie maintains a light touch, keeping us at arms length yet keeping his sights trained on his subjects' human characteristics. 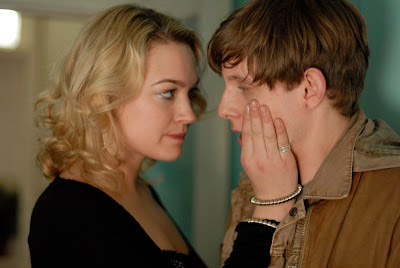 It has such a peculiar, singular worldview that the ultimate result isn't lewd or exploitative. Instead it has a strange kind of charm, a warm, open disposition that even in its darkest moments, we always pull for Hallam, who is transformed into a lovable, unlikely hero of sorts by Jamie Bell, whose performance anchors the film, even when it threatens to become too bizarre for its own good.

The film has a tendency to jump the tracks a bit in the scattershot nature of the plot, which leaves key pieces of the characters' history blank that could have further clarified where they're coming from. But as I noted earlier, that's not really the point. We're not here for psychological clarity, we're here for depth of feeling. Mister Foe isn't as moving or as emotionally probing as it could be, but it offers a beautifully unique window into the life of a decidedly odd teenager with enough issues to fill several psychology textbooks with a refreshingly uncynical eye. I may never be able to fully explain why it entertained me or why I cared so much about Hallam, but I think that's really the point. We watch, as Hallam does, for the sake of watching, and to find perhaps a window into our own world. And in Hallam we find a scarred soul with a heart of gold, whose curious charm we may not be able to articulate, but its effects won't be going anywhere anytime soon.

Anonymous said…
Well, this review is completely on target as far as I'm concerned. I saw the Region 2 DVD months ago, and your reservations here do resonate. Still I agree that it's intriging and intermittantly fascinating. The DVD is titled HALLEM FOE.
3:21 PM