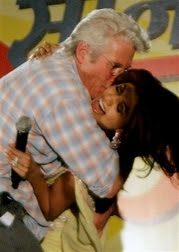 NEW DELHI - Angry crowds in several Indian cities burned effigies of Richard Gere on Monday after he swept a popular Bollywood actress into his arms and kissed her several times during an HIV/AIDS awareness event in New Delhi were splashed across Monday's front pages in India — a country where sex and public displays of affection are largely taboo.

In Mumbai, members of the right-wing Hindu nationalist group Shiv Sena beat burning effigies of Gere with sticks and set fire to glamorous shots of Shetty.

Similar protests broke out in other cities, including Varanasi, Hinduism's holiest city, and in the northern town of Meerut, where crowds chanted "Down with Shilpa Shetty!"

Damn. And I thought fundamentalist Christians got upset over The Da Vinci Code...