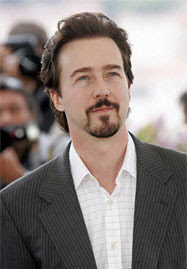 Reuters is reporting that Edward Norton will take over for Eric Bana as Bruce Banner/Incredible Hulk in the upcoming franchise "restart," which is set to be released in June 2008.

The first Hulk film, directed by Ang Lee (Brokeback Mountain) was widely panned and considered a failure by fans and critics alike. For the new film, The Incredible Hulk, will be directed by Louis Leterrier (The Transporter), and will go on as if the first film never happened.
Email Post