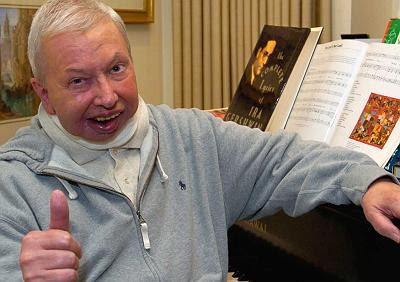 Film critic Roger Ebert is returning to the movie scene after a long absence to battle cancer of the salivary gland.
Says Ebert of his ordeal:

I have received a lot of advice that I should not attend the festival. I’m told that paparazzi will take unflattering pictures, people will be unkind, etc.

Frankly, my dear, I don’t give a damn. As a journalist I can take it as well as dish it out.

So let’s talk turkey. What will I look like? To paraphrase a line from “Raging Bull,” I ain’t a pretty boy no more. (Not that I ever was. The original appeal of “Siskel & Ebert” was that we didn’t look like we belonged on TV.)

What happened was, cancer of the salivary gland spread to my right lower jaw. A segment of the mandible was removed. Two operations to replace the missing segment were unsuccessful, both leading to unanticipated bleeding.

A tracheostomy was necessary so, for the time being, I cannot speak. I make do with written notes and a lot of hand waving and eye-rolling. The doctors now plan an approach that does not involve the risk of unplanned bleeding. If all goes well, my speech will be restored.

Ebert's determination is to be greatly admired here. His love of movies and unwillingness to let his illness get him down (or the paparazzi for that matter), is stunning.

It's good to have him back in business. The movie world just hasn't been the same without him. Welcome back Mr. Ebert. We missed you.

You will always get two thumbs up from me.