The Best Movies You're Not Watching

TV Guide is famous for its annual list of the "Best Shows You're Not Watching," which details quality shows with small audiences. It seems only fair that the same should be done for films.

It's one of the great sorrows of being a critic, discovering films you love, and watching as the disappear without a trace at the box office. How many moviegoers last year found a theater showing The House of Sand, Sweet Land, or Shortbus, or for that matter, even heard of the films at all? Not many, I imagine. But they were three of my favorite films of last year, and yet no one went to see them.

Not that the studio had the confidence to give them very wide releases. So it's just as painful, if not more so, if a film is playing in lots of theaters, and yet still no one is going. That is happening right now to the Robert Rodriguez/Quentin Tarantino double feature Grindhouse, which has bombed at the box office.

But another film is struggling as well, one much more worthy of attention. In my opinion, it is the best English language film of the year so far.

I am talking about Lasse Hallström's remarkable, endlessly compelling, The Hoax. 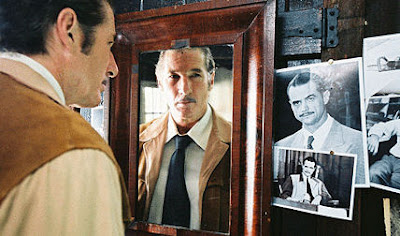 Telling the story of Clifford Irving, the author who fabricated an "autobiography" of infamous billionaire Howard Hughes, features career best performances from both Richard Gere as Irving, and Alfred Molina as his research partner Dick Susskind.

From my review (to be published on Thursday):

Gere, with his fake nose and used-car salesman smile and sideburns, is a marvel, but the real scene stealer is always reliable character actor Alfred Molina (“Spider-Man 2,” “The Da Vinci Code”) as Irving’s reluctant partner in crime, Dick Susskind. Molina’s portrayal of a good man hopelessly in over his head is every bit as compelling as Gere’s emulation of a slow descent into madness fueled by his own lies. Molina wears the initial giddiness and the petrified desperation of a man who realizes he is in way too deep with the assuredness of a master thespian.

These are the kind of layered, deeply felt portrayals, at once witty, funny, and poignant, that get Oscar nominations - and if this film had been released later in the year, it would be almost guaranteed. Being a mid-April release, it's the longest of long shots. And not just because of the release date. The film just isn't getting the kind of heat it deserves, from audiences or critics.

It has been quietly racking up good reviews (it currently has an 86% positive score on Rotten Tomatoes, and a respectable 70 on Metacritic), but not the kind of passion I would expect from a film of this quality. It is even better than David Fincher's excellent Zodiac, which has been heaped with praise, and Mike Binder's tender gem Reign Over Me, which didn't get the universal acclaim of Zodiac, but does have its zealous supporters (namely Jeffrey Wells over at Hollywood Elsewhere).

Films like The Hoax are something to be treasured - a mature, entertaining, finely crafted film released early in the year when most studios are mainly churning out junk.

Hallström is no stranger to the Oscars. His films The Cider House Rules and Chocolat scored back to back Best Picture nominations in 1999 and 2000. And The Hoax is certainly better than those two films (even though I love Chocolat). I don't know if I would go so far as to call it Best Pic material yet, but it most definitely deserves attention if for no other reason than the performances of Gere and Molina alone.

Oscar material in April? You bet. You heard it here first.