I read an interesting article by Joe Queenan in today's New York Times - the basic point being that most college campuses are showing mostly low brow new releases instead of high art films.

In olden days — say, from the morning the Sorbonne was founded until the night MTV made its debut — the traditional purpose of the university was to provide some sort of sanctuary from the world of Mammon. The idea was to erect an island of intellectual freedom where young people could probe and question and develop their own ideas before reality closed in and everybody went to work for a private equity firm. Part of this nurturing process was to expose young people to great books, great music and great films.

This was not to denigrate mainstream pop culture; saucy comedies about grown men cavorting in diapers have always had an important role to play in our society, and always will. Still, there did once reign a belief that because generic Hollywood fare was widely available elsewhere in a way that films by Eric Rohmer were not, it might be nice to apprise students of the world of cinema beyond Jack Black and Adam Sandler.

While I agree with the basic point of what Queenan is saying, his argument is inherently flawed. The example he keeps coming back to is Saw III, saying at one point:

Since “Saw III” contains graphic scenes in which naked or near-naked women are tortured to death, fussbudgets might pose the age-old in loco parentis question: Who’s monitoring these programs to make sure my daughter doesn’t wander into somebody’s dorm room and see a bunch of naked women being defiled?

We're talking about colleges here, not high schools - adults who are able to make their own decisions about what kind of films they will watch. No one needs to be there to "protect" them from anything. R-rated fare is perfectly acceptable on a college campus where everyone is over the age of 17.

This kind of thought makes his argument sound dangerously like a prudish, knee-jerk conservative, wringing their hands over "what our children are watching." 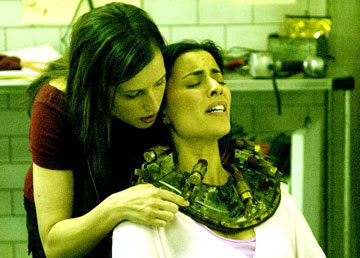 Yes I had a problem with Saw III (pictured above), and yes I voiced it rather loudly. But his argument about the innocent ears of college students doesn't ring true at all, and I think hurts his point.

Which is that colleges aren't showing intellectually stimulating movies. They're showing Saw III and Napoleon Dynamite and movies of that ilk.

Which is true. I am a college student who lives on a college campus. We have two theaters here on my campus. One, which shows the latest second run current films, and another which shows classic films. In between there are various screenings of independent and foreign films that are a part of film series sponsored by different campus organizations.
This weekend alone the three films playing on campus were Smokin' Aces, the classic Steve McQueen starrer The Great Escape, and Duck Season, a Mexican coming of age tale.
That's quite a variation. And for my film class there have been screenings of films by Jean-Luc Godard going on all semester - Breathless, Le Petit Soldat, Vivre sa Vie, Bande á part, Masculin Feminin, Week End...the list goes on.

The issue here is that campus film programmers have to show the latest blockbusters so they can make enough money to show the more intellectually challenging films, because the sad truth is that not many people are going to go see them. I watched the first Saw movie in a campus theater with a packed house. I saw The Motorcycle Diaries play to a nearly empty house.
Our film programming society here does a pretty good job of alternating between populist picks and more critically acclaimed fare. This semester we've shown everything from Borat to Babel to Dreamgirls to Marie Antoinette to The Departed to The Holiday to Stranger than Fiction. Not a bad mix overall, showcasing films that appeal to a wide range of people.

The sad fact of it is The House of Sand just isn't going to pull in huge audiences. Ditto the classic films Queenan mentioned like The Seventh Seal (pictured below), The 400 Blows, or Citizen Kane (which actually screened on campus here this year). 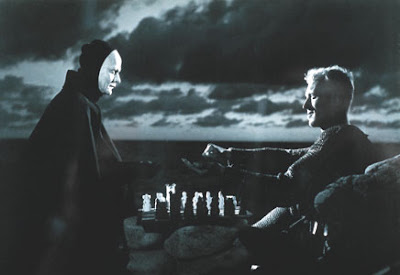 All three films are available in our library, but drawing a huge crowd with them is hard to do. Which is what most of these campus programming organizations need to do to survive.

I can't speak for all colleges, but I believe mine has a pretty good variety. And we're not a huge school - around 14,000 students or so. The problem really isn't with the programmers, or the colleges, but with the students themselves, and the overall devolution of taste prevalent in today's culture. Audiences want big, dumb laughs and pointless violence. And until more intelligent filmmaking gets wider distribution and more targeting toward mass audiences, the problem won't be fixed.

But the films are there. Sometimes you just have to know where to look.
Email Post