"Ocean's Thirteen" to Premiere at Cannes

Variety is reporting that Steven Soderbergh's Ocean's Thirteen will premiere out of competition at the 60th annual Cannes Film Festival in May. 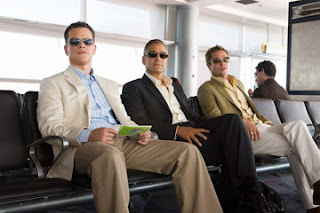 The film stars George Clooney, Brad Pitt, and Matt Damon, with Al Pacino joining the all star cast from the previous films.

Ocean's Eleven grossed $183,417,150 at the domestic box office in 2001, according to Box Office Mojo, while its critically maligned sequel, Ocean's Twelve, made $125,544,280 three years later.
Ocean's Thirteen will be one of several third franchise installments bowing this summer, joining Shrek the Third, Spiderman 3, and Pirates of the Caribbean: At World's End.

The film is set to open theatrically on June 8. The Cannes Film Festival will announce the rest of its lineup on April 19.
Email Post