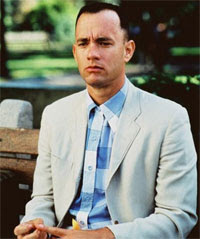 An absolutely reliable, unfortunately anonymous source, contacted me tonight with the latest scoop on Forrest’s impending return. It seems that old 2001 Eric Roth screenplay is being dragged out of development hell for another look by Gump producers Steve Tisch and Wendy Finerman. Remember that the first Forrest Gump movie was based on a novel by Winston Groom. Roth’s sequel script was based on Groom’s followup novel, “Gump & Co”. “Gump & Co” takes place several years after “Forrest Gump” and finds Forrest’s shrimping business failed and Jenny dead, leaving Forrest a single unemployed father. As you’d expect, Gump still stumbles through more important historical events. In this case it’s a cavalcade of history from the 80s and 90s. He even meets Tom Hanks.

This just has bad idea written all over it. It may have worked for The Godfather, I could even see a Departed sequel (maybe), but Forrest Gump? What about that movie needed expanding upon? It reached a natural conclusion, going forward with it would be contrived.

Yes the original one was extremely popular, but wanting to make this sequel seems like a shameless pocketbook-lining ploy. The original one was a good film, not a great one...under no circumstances did it deserve to win Best Picture over Pulp Fiction, one of the most important cinematic works of the decade. It was the movie of the moment, nothing more.

If this actually comes to fruition, especially now 13 years after the release of the original, I think everyone will see it for what it is. The moment has passed. Let it go.
Email Post