You can tell there is a major election coming up, because the Federal Trade Commission is working on finalizing its report on marketing violent entertainment to children.

From the New York Times:

The Federal Trade Commission is putting the final touches on a follow-up to its September 2000 report on the marketing to children of violent movies, music and video games. The first such assessment in three years, it will examine the selling practices of a mainstream entertainment industry that in the interim has become increasingly dependent on abductions, maimings, decapitations and other mayhem once kept away from studio slates.

Seven years ago the film industry narrowly avoided federal regulation of its advertising practices, as politicians, in the wake of the Columbine High School killings, called executives before a Congressional committee but eventually agreed to let Hollywood police itself.

The effectiveness of the resulting marketing guidelines is now being tested by rougher movies, competitors not bound by strictures that apply to the trade association’s major studio members, and a flourishing Web culture that has driven big openings in the last three years for harshly violent films like “Saw” or “Hostel” without much concern about the age of viewers.

If the new study were to find that the industry has violated or has outgrown its voluntary standards, it might kick the issue back into the political arena ahead of a presidential election. There it could trigger fresh calls for regulation, or even kill a gory source of relatively easy money.

Of course they should let Hollywood police themselves. Anything else would be censorship. This is the kind of conservative knee-jerk non-issue that appears around election time to make politicians appear to be a strong "family values" candidate, and then disappears as soon as the candidate is elected. This has been a pet project of everyone from John McCain to Hillary Clinton for years, but only, as you might have noticed, during election time.

Neither After Dark nor Lionsgate is a member of the Motion Picture Association of America, which represents the major studios. Such nonmember companies are not bound by the association’s promise to keep ads away from television shows, magazines and Web sites for which 35 percent or more of the audience is under 17. But they do agree to use approved advertising materials for any film that is submitted to the group for rating. In the case of “Captivity,” the association had disapproved of the material and is now considering disciplinary measures.

“I’m very, very troubled by this particular case,” Dan Glickman, the trade group’s chief executive, said Thursday about the “Captivity” billboards. “I can tell you this issue will not go unnoticed.”

While I applaud MPAA head Glickman's efforts to gain mainstream acceptance of the NC-17 rating, the hoopla over this billboard is a bit much. 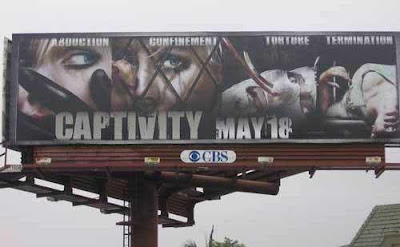 The offending billboard is no more graphic than advertisements for the Saw films have been.
Teens are going to want to see R-rated films. Every teen boy in the country probably wanted to see 300, and most, I imagine, have found a way to see it. And most of them don't get their information from billboards and TV spots. They get it from the internet. MySpace was swamped with ads for 300 months before the film was released. And how many MySpace users are under 17?
I will agree that there are some films that children shouldn't see. But it always depends on the film and the child. The idea of Washington policing Hollywood is a starting down a very slippery slope that has implications I find very disturbing. How long is it before they start dictating content of films, and artistic expression takes a blow in the name of "protecting the children" or worse yet, "preserving decency."
No one has the right to police what you watch other than you. Plain and simple. It's that whole "freedom of speech" thing that our government seems to have such a problem with. I just want to know why more time isn't spent trying to get our troops out of the very real violence in Iraq instead of worrying about fake violence on the silver screen?

In my review of Saw III back in November I said:

That made me wonder as I left the theater, what does "Saw III" say about us as a society? The audience is not pulling for the victim, they are pulling for Jigsaw. They want the victim to fail in their quest so they can see the horrible trap be set off, showcasing yet another ingeniously sadistic way to die. I wonder what film historians will say about the "Saw" films and the society that gave birth to them. Just as the "Rambo" films were born out of Reagan-era America, with its burly, muscle-man machismo, what is it about us today that gave rise to the overwhelming popularity of torture-oriented horror films like "Saw" and "Hostel?"

Torture and sadism are the new standards of horror. Americans are thirsty for more blood. And each new film has to top the previous one in acts of bloody savagery. It makes me wonder, if in today's world where our own government endorses torture of foreign detainees, where incidents like Abu Ghraib are standard on the nightly news, are we as a society desensitized to, if not flat out entertained by, human atrocities? Is that why we allow these things to happen? People are not going to see "Saw III" to be disturbed - they are going to be entertained. I can't help but think what separates us from the Romans shouting for the kill as prisoners were fed to the lions in the Coliseum?

That's not to say I have a problem with violence in film (I actually thought "Hostel" was too tame). My two favorite films of the year so far, Clint Eastwood's elegiac "Flags of Our Fathers" and Martin Scorsese's brutal "The Departed," both feature extreme violence. I don't believe there is such a thing as "too far," unless someone actually gets killed. People can film whatever they want. However, when such sadistic brutality becomes fun instead of repulsive, then something seems wrong about how we view films, not necessarily the films themselves.

And I stand by that. However it is not the job of the films or filmmakers so much as it is for the audience and their perception. Saw III's extreme violence was the result of poor filmmaking skill and lack of confidence in their own abilities. It was born out of unoriginality and storytelling weakness. The problem was in how the film was so well recieved by audiences, which is much more disturbing than anything in the film itself.

In the screening of The Hills Have Eyes that I attended last year, a middle aged lady next to me was pumping her fist in the air and yelling "that's what I'm talking about, rip his throat out!" during the gory, vigilante finale. And while I thought The Hills Have Eyes was a pretty good horror film, I was more disturbed by the woman next to me than the carnage onscreen.

I think that speaks volumes about today's audiences. We are a blood thirsty society, and Hollywood, ever the capitalists, are only too willing to feed the bloodlust. But each time they have to top themselves, and the audiences keep demanding more and more.

The same thing goes for stupid comedy as well. Audiences love it, and as long as tickets are being bought Hollywood will keep churning it out. Therefore the blame doesn't necessarily rest with Hollywood, but with the low tastes of America's viewing public and studios' greed.

How to solve it? I have no idea. All I know is that it's not the government's business. They have better things to do.
Email Post