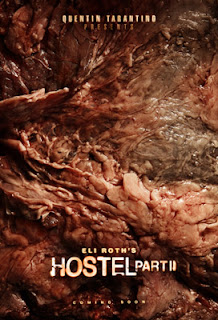 So we're out of touch are we? If being in touch means enjoying watching people get tortured within an inch of their life, and pumping my fists in the air in excitement over it with the rest of the mouth breathers, then I don't want to be in touch. Roth comes off like an arrogant, obnoxious teenager in the interview, which could explain why he makes movies the way he does.

However, what disturbs me about this new torture trend is how it reflects the permissive nonchalance with which real-life torture is treated in this country. People think that torture is fun, and movies like Saw and Hostel are only feeding the beast. They come from the gross-out school of filmmaking - the idea that you have to see everything in gory detail in order for it to be scary. In reality, this is lazy, pandering filmmaking, the kind of thing that is geared toward an audience that is so ADD that they have to be constantly shown the scary things, instead of teased with them, which I think is far more scary.

That's why The Descent is one of the finest, most terrifying movies in years, and Hostel isn't. And if anything, The Descent is actually the more violent of the two. The difference is that Hostel and its offspring treat their audiences like idiot children, while The Descent and others like it (although they are few and far between), respect their audiences enough to give them credit for actually understanding what is going on, without constantly having to remind them.

The problem isn't always necessarily with the films themselves, but with the audiences. People eat this stuff up, and they enjoy it. The fact that people find torture enjoyable is more disturbing than anything going on onscreen. And as long as filmmakers keep feeding the beast, it will only get hungrier for ever increasing amounts of cinematic carnage, continuing this startling trend of a society who thinks torture is perfectly OK. And fun.
Email Post