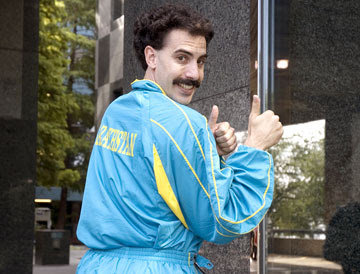 In a report released by the US State Department this week, Kazakhstan was listed as a violator of human rights for censoring Sacha Baron Cohen's .kz web domain for his film Borat: Cultural Learnings of America for Make Benefit Glorious Nation of Kazakhstan, which grossed $128,487,593 domestically, because it was considered offensive.

Also listed were the Bahamas for banning Ang Lee's Oscar winning film, Brokeback Mountain which according to their government "lacked public value and depicted extreme homosexuality, nudity and profanity;" and Egypt and Samoa for banning Ron Howard's film version of The Da Vinci Code out of fear that it would cause religious unrest. 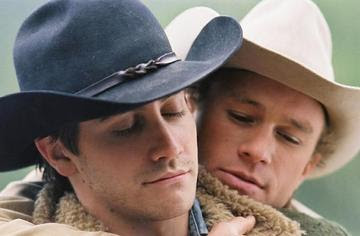 The report also listed Poland among the violators, "for a court's failure to act on an appeal by artist Dorota Nieznalska, who was convicted in 2004 of offending religious beliefs and sentenced to six months of "restricted freedom" and community service for putting a photo of male genitals on a Christian cross."

I don't know why, but I find some poetic justice in the fact that the United States Government is having to defend Brokeback Mountain and putting male genitals on a cross...you know they had to be gritting their teeth the whole time.