An Interview with David Lynch 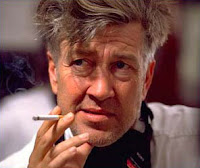 The New Statesman sits down with my favorite director to talk about his new art exhibit, The Air is On Fire.

"They say once the bell has been rung, it's been rung," says David Lynch cryptically, his pale blue eyes staring fixedly past my right shoulder, out over the pristine panorama of Paris visible from the top floor of the Fondation Cartier gallery. He looks like a rugged, kindly old lumberjack, but there is something very odd about his manner. He never makes eye contact, and, as he talks, he holds his hand up to his right ear and wiggles his fingers, as if speaking through an imaginary glove puppet. The effect is disconcerting, to say the least. I feel a chill run down my spine, the same kind of sensation I experienced when Patricia Arquette suddenly turned into a horrible grinning demon in Lost Highway, or when Dennis Hopper appeared clutching his gas mask in Blue Velvet. "That was, you know, a very bad thing. A very bad thing."

Lynch is talking about the Abu Ghraib scandal. That moment when America's perversions were paraded in front of a world audience in some ways fulfilled his personal prophecy. For decades, his films have explored the darkness inherent in American culture, often through the prism of twisted sexuality. Behind gleaming white picket fences, the Lynchian landscape has always been characterised by sexualised violence, from Twin Peaks' Laura Palmer, the schoolgirl who "got off on" being murdered, through Alice, the pros titute dismembered in Lost Highway, to Blue Velvet's sadomasochistic nightclub singer, played by Lynch's then-partner, Isabella Rossellini.

I ask him whether he feels his artistic vision has been vindicated by recent events in America. "That's exactly the way it's been going," he says, nodding sagely. "In the 1950s, everything had a very beautiful façade. There was optimism in the air and a feeling of moving forward in a good way. But, looking back, we realise that all the sicknesses and perversions, distortions, all these things were there. They were just covered over. No one talked about them; no one looked, really. But in the time since then, the sicknesses are being revealed, and everyone says, 'Oh my goodness, oh my goodness' - but it was always there. So it's a good thing. It's there and they examine it, and maybe try and find a way to cure some things."