While this chart is technically predicting the Director's Guild of America nominees...it looke like a pretty good indicator of Oscar as well. Take a look. 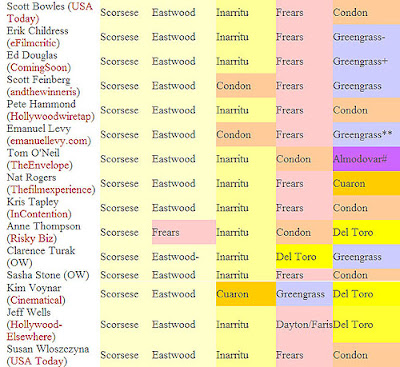 If this is any indication, it's going to be another Eastwood/Scorsese battle royale, with Iñarritu and Frears almost guaranteed a nomination as well. It's that fifth slot that is the wildcard. I think it will most likely be Bill Condon for Dreamgirls, but Guillermo Del Toro (Pan's Labyrinth), and especially Paul Greengrass (United 93) are distinct possibilities.

I would like to see Alfonso Cuarón get a nomination for Children of Men, but his chances aren't looking too hot right now.