I think I am quite possibly looking forward to this more than any other film of 2007. And it has one of the best posters I have ever seen: 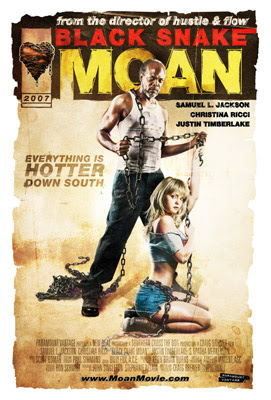 Directed by Hustle & Flow (a film I was admittedly not impressed with) helmer Craig Brewster, Black Snake Moan stars Samuel L. Jackson as a simple, God-fearing man living in the backwoods South, who comes across a self-destructive nymphomaniac (Christina Ricci), and decides to chain her into his house until he can cure her of her behavior.

The poster and premise have gritty exploitation written all over it, but with such a knowing wink that any hint of sexism is dispelled. Check out the trailer:

In a surprisingly glowing review in the latest issue of Film Comment, Nathan Lee says:

Black Snake Moan sings the blues—hard, long, from the bottom of the gut, slushing around in bile and Jack Daniels and yesterday’s grits, wailing on a slide guitar, thunder, lightning, heartbreak, death, regret, baby Jesus, gravy. Life hurts bad, and Brewer doesn’t shy from real suffering. Snarky retro camp has nothing to do with it. There’s no condescension here. Rae’s road back to something like self-control is hard won, fraught with slippage, as serious and persuasive as the journey of L’Enfant. Brewer’s recipe is solid: home-cooked meals, hothouse blues, God’s love, patience. Ricci’s performance is so fearless, specific, and blazingly committed it carries the second half of the picture over the slight underwriting of Jackson’s character and his clear limitations as an actor. She’s the white-hot focal point of Brewer’s loud, brash, encompassing vision of the soul’s dark night survived, peering into the dawn. That’s right, haters, I said “vision.” And one so honest and healthy and against the grain of indie solipsism and Hollywood cynicism that it’s just about visionary.

That is high praise indeed, especially from a high brow cineaste magazine like Film Comment. I can only hope the film lives up to my expectations at this point.

Black Snake Moan will be released everywhere on February 23.