Entertainment Weekly on the "Children of Men" Snub 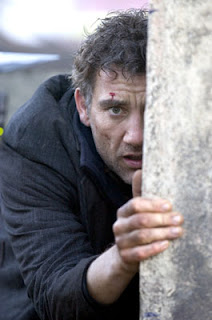 Maybe its harrowing portrait of a dystopian future was more than Academy voters could bear. Maybe its late release date and the truncated Oscar calendar combined to work against it. Either way, the omission of Alfonso Cuarón's Children of Men from the list of this year's Best Picture nominees is one that film historians and fans alike will almost certainly look back on with befuddlement. Children of Men is the rarest of films — it's a nail-biting adventure that follows an expectant mother (Claire Hope Ashitey) and her skeptical guardian (Clive Owen) in a race against time; a subtle commentary on global politics; and a gut-wrenching vision of a world without children, without hope. In much the same way the film haunts viewers days, even weeks, after seeing it, we suspect the specter of its snub will haunt the Oscars telecast come Feb. 25. —Michael Slezak

I couldn't have said it better myself. Not nominating Children of Men may not be a surprise right now because of its weak campaign, but down the road, not nominating the best film of the decade will be a shame the Academy may not live down - akin to not giving Citizen Kane Best Picture. It will be seen as a sign of the climate at the time, sure, and the late start in the gold derby didn't help. But ignoring COM is one of their greatest injustices.
Email Post