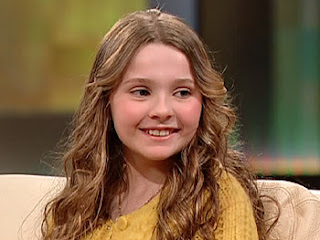 Abigail says she was asleep when the Oscar nominations were announced. "My mom and my brother came in and they were screaming and they woke me up," Abigail says. As far as what she is going to wear to the awards, Abigail says she has no idea. "My favorite color is red," she says.

Even though she doesn't know exactly what her dress will look like on Oscar night, she does know who she is going to bring to the awards. "Well, I'm not old enough to date yet…so my parents and my Curious George," she says.

How ridiculously cute is this girl? She had cookies on her purse at the Golden Globes. Cookies!

You know I wouldn't mind seeing her take home the award. She's just impossible not to like. Plus she's great in the film - she was so natural.
Email Post