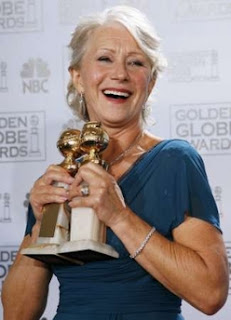 In a recent entry in his Goldderby blog, Tom O'Neill claimed that Helen Mirren's Oscar crown is now shaky because of her Golden Globes speech.
Huh? Is he serious? Mirren was regal as always. She has had this award in the bag since before the season begun. There is no way she can lose at this point. To think that the voters wouldn't vote for her because of her Globes acceptance speech is just absurd. She remains the undisputed frontrunner of the race. Yes Meryl Streep had a great speech, but to say that voters would switch their vote to her because of her speech is, well, underestimating them. Mirren will be crowned queen of the Kodak theatre on February 25th. If the Academy doesn't recognize her they will come off looking like idiots, as the ONLY voting body not to do so. And I think they know that. They cannot ignore the single best performance of the year, and one that has a universal consensus behind it.
Her throne isn't shaky. It's as strong as ever. And her win last night only cemented her victory.
Email Post