Nostalgia has become such a driving force in American cinema, and with Spider-Man: No Way Home becoming the first COVID-era film to do pre-pandemic level box office numbers, that likely isn't going to change anytime soon. 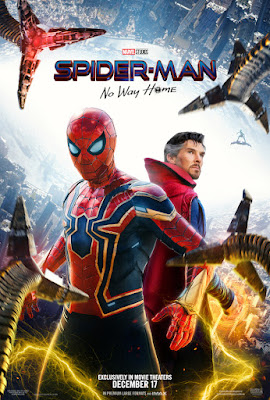 In some ways it's easy to see why - two years into a worldwide pandemic that has changed so much about how we live that it's no wonder that audiences are hungry for something warm and familiar, that reminds us of a happier time. Not necessarily a better time, but at least one where we were younger and perhaps  not so aware of the many problems that exist outside of our immediate periphery. And there is something to be said for looking fondly on the past, it is another thing entirely to dwell there at the expense of moving forward. Therein lies the problem with Spider-Man: No Way Home  and many other films of its ilk; it's far too easy to rely on audiences' memories of older films than it is to make new and exciting stories that introduce us to characters and ideas we've never encountered before.

No Way Home seems to exist solely to remind audiences of the past, which hobbles it from the get-go in myriad ways. Capping off the Marvel Cinematic Universe's Spider-Man trilogy, No Way Home also seeks to tie in every previous cinematic iteration of Spider-Man in a collision of universes that acts as a kind of closing act that Sam Raimi and Marc Webb's Spider-Man series never really had, each being unceremoniously cancelled in favor of each subsequent reboot. In this film, Peter Parker (Tom Holland) has been unmasked as Spider-Man, and has found his life in shambles, with those closest to him bearing the brunt of the consequences. Seeking to undo the damage, he implores Doctor Strange (Benedict Cumberbatch, whose once brilliant character has been turned into something of an idiot) to cast a spell of forgetfulness to wipe the world's memories of his identity. The spell goes horribly wrong, however, and opens the door for the Spider-Man rogues gallery from other universes to come pouring through.

The presence of villains like Dr. Octopus (Alfred Molina), Green Goblin (Willem Dafoe), and Electro (Jamie Foxx) was the center of the film's marketing campaign, which also hinged on a "no spoilers" tease that masks the fact that there are no real surprises to be had here, and the "big secret" that everyone is so worried about having spoiled for them is about as obvious as the four mechanical arms on Doc Ock's back. But for a film whose twists were never really in doubt, it's surprising just how little weight they are given. Sure, it's nice seeing these beloved characters back on the screen, but they really only serve to remind us of better films. No Way Home looks like mud, trafficking in the kind of under-lit visual sludge that is so typical of modern superhero spectacle. It's such a long way from Raimi's Spider-Man trilogy, and seeing these characters return only highlights the weakness of the MCU entries - things were so much more compelling when these films were actually directed rather than cobbled together by a committee for the purpose of fitting into some larger web of intellectual properties designed to keep audiences coming back for more and boxing other films out of cinemas.

Yet by far its greatest sin is how the entire plot revolves around giving closure to nearly every major character of the earlier Spider-Man films, and in doing so revealing not only a fundamental misunderstanding of how storytelling works, but what made those earlier films (and their characters) work so well. While their respective series never really got a "final" chapter, each character had a full arc. Their stories do not require closure, because for the most part they already had it. It's the most fatal flaw of No Way Home, a determination to continue stories that were already completed, so it essentially has nowhere to go. It simply rehashes ideas that we've seen before in better films. It will no doubt make bucketloads of money, and lead to yet more legacy sequels that rely heavily on audience nostalgia, but it fails as both a film and a piece of storytelling because in its desperation to give its villains a "second chance," it reveals that it has nothing new or interesting to add to their stories. It's simply a shadow of things that once were, reheated without the wit or imagination that made audiences fall in love with them in the first place.