Of the three feature films directed by Aaron Sorkin, Being the Ricardos is arguably the strongest. It's at least the most enjoyable and least Sorkinesque, but like much of the work that he has brought to the screen himself, Being the Ricardos doesn't hold up to scrutiny, and completely falls apart the closer one looks at Sorkin's old school liberal affectations. 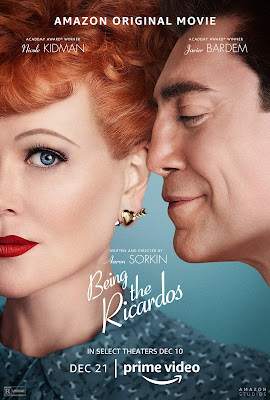 Like Trial of the Chicago 7 before it, Being the Ricardos essentially defangs the radical politics at its heart, boiling down a much broader, much more fiery idealogical conflict into a martial spat between Lucille Ball (Nicole Kidman) and Desi Arnaz (Javier Bardem) that took place over one week of filming "I Love Lucy," after it was discovered that Ball had once registered to vote as a Communist. This being the height of power for Joseph McCarthy's House UnAmerican Activities Committee, the show finds itself in a tenuous position as the cast and crew waits for the national news to either pick up or ignore the story. The controversy reveals heretofore ignored tensions in the Arnaz's marriage, as the power imbalance between being one of the most powerful women in Hollywood leads Lucy to fear that Desi is feeling emasculated, or worse, cheating on her. Desi's anti-Communist Cuban roots makes the conflict more personal, and he becomes obsessed with setting the record straight, even if that means making Lucy's left wing sympathies look like a silly mistake that undermines her intelligence.

While the specter of HUAC provides the backdrop for the film, it's the  marriage and partnership between Lucy and Desi that takes centerstage. The film is most interesting when it's focusing on Ball's creative process, and the perfectionism that led her to becoming one of the greatest comic minds of all time. Kidman is a marvel, wholly embodying the legendary comedian's on and off screen personas in a way that is often uncanny, despite a relative lack of visual resemblance to the character. She is surrounded by a game supporting cast, including standouts J.K. Simmons (inspired casting as William Frawley) and Nina Arianda as Vivian Vance. When Sorkin focuses on the creative process, and the planning, arguments, and compromises inherent to crafting a weekly television program, Being the Ricardos is often quite thrilling. It falters, however, in its exploration of Ball's politics, with Sorkin doing some painful equivocations between communism and HUAC with the old "both sides" song and dance so typical of moderate Democrats.

That being said, the film often finds Sorkin relaxing in a way that's mostly pleasing, the visual choices (while still mostly uninteresting) feel less flat, or at least more suited to the small screen roots of its subject. It's agreeable Oscar bait in the My Week with Marilyn vein, but one consistently wishes that someone other than Sorkin was directing this - someone with less predictably middle of the road politics who could navigate the thorny issues its characters are facing. The framing device, utilizing characters as aged talking heads narrating the action documentary style, feels surprisingly cheap for the usually dynamic screenwriter, and Sorkin often ignores major plot threads only to resurrect them for major emotional reveals that feel tacked on in order to wrap things up quickly.

In the end, there are some nice moments here when Sorkin allows Kidman to sink her teeth into the character, but as is often the case with his directorial efforts, he just can't seem to get out of his own way. Being the Ricardos is an often amusing, easy going watch, but Sorkin's attempt to comment on "the state of things" results in some groan-worthy moments (his POV awkwardly revealed in his press tour statements equating HUAC with "cancel culture"), even going so far as to position J. Edgar Hoover into a heroic moment at the film's climax. Ball's story is certainly a fascinating one, and the week in question was certainly a defining moment in her career, but Sorkin can't seem to figure out what he's trying to say here, giving us a somewhat muddled film marked by some terrific performances that would have been better served by a more streamlined narrative that focuses more on the creative process and less on Sorkin's neoliberal predilections.