Adam McKay's progression from director of solid, if sophomoric,  comedies like Anchorman, to humorless cosplay progressive scold has been a fascinating one. It started with the Oscar nominated The Big Short, and continued with Vice, in which McKay took recent history and tried to explain it to the masses in the most condescending terms possible, dressing up rank neoliberalism as progressive populism with zero self awareness. 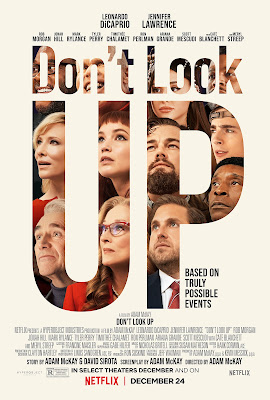 His latest, Don't Look Up, continues the trend, but rather than a glib history lesson, it's a work of satirical fiction designed to amplify and reflect the state of our COVID-addled world and the looming climate change crisis. Leonardo DiCaprio and Jennifer Lawrence star as scientists who discover a rogue comet that will intersect with Earth's orbit in six months and wipe out all of human life. Their warnings fall on deaf ears, from the corrupt American president (Meryl Streep) who's too concerned with midterms and a controversial Supreme Court nominee, a media who only wants to spoon feed good news, and a disinterested public, who are too invested in celebrity gossip to care about their impending doom. As the situation becomes more dire, corporations are called upon to solve the problem, but only make it worse as they seek to exploit the comet for profit.

Don't Look Up often feels like the cinematic equivalent of watching the Democratic National Convention, as a lot of wealthy neoliberal politicians lecture the population about how every problem is our fault and the only way to fix it is to vote for them, repeat ad nauseam every election cycle with little change. Yes, it's a condescending lecture that is mostly preaching to the choir, wagging its finger at all the rubes for their part in destroying the world, trafficking in some deeply conservative personal responsibility politics - in essence scolding the entire audience and telling us "we'd have solved global warming by now if it weren't for all YOU dumb assholes." But beyond its deeply cynical political outlook, the biggest issue here is that it's just not funny. The satire is too broad, the targets too easy, the metaphors too obvious, it's scribbling its themes with the biggest, sloppiest marker possible, and the results are a complete mess.

It's clearly very pleased with itself, but that self-satisfaction is it's biggest downfall because it's not nearly as clever as it thinks it is. The pacing feels all wrong, the editing is a nightmare, and every single performer involved seems completely baffled by its heavy-handed script. Rarely is such an impressive collection of talent so spectacularly wasted. That the filmmakers seem to think that any criticism of their film is tantamount to climate denial speaks to the film's completely wonky POV, completely unable to comprehend that is is the very brand of milquetoast Hollywood activism it seeks to satirize in the film's final act. If your idea of entertainment is being lectured by sanctimonious liberals who aren't telling you anything you don't already know but think they're being incredibly profound, then Don't Look Up will be right up your alley. But this movie isn't going to save the world, and neither are individual actions. It is going to take mass leftist action on a global scale, not tedious neoliberal pontificating or guilt-tripping - but the filmmakers seem entirely satisfied that their film is an essential piece of the puzzle to solving a global crisis. They are very much a part of the problem they seek to shame us for perpetuating, but can't see it due to their own breathtaking egoism. This isn't just a noble failure, it's a flat out bad film, an attempt to address a very real planetary crisis in the simplest and most misguided terms, without so much as having the courtesy to make us laugh in the process. Good satire punches up rather than down. Don't Look Up simply lashes out in all directions, without landing a single punch.