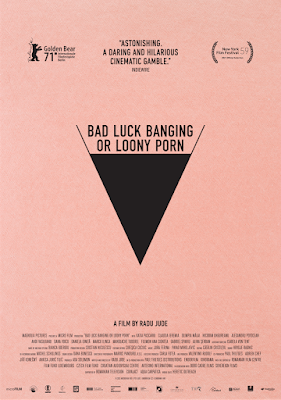 My mind has been reeling in multiple directions following my first encounter with Jude's singular film this week. Fractured into three parts, Bad Luck Banging or Loony Porn is so many things at once that it's difficult to tell if its hitting the nail on the head a little too squarely or on the verge of flying off the rails. And that is, perhaps, what makes it such an endlessly fascinating work. The film centers around Emi (Katia Pascariu) a teacher whose husband records them having sex, only for it to get mysteriously leaked and spread all over the Internet. Emi is mortified, but even more so when a parents group at her school gets ahold of it and begins to demand for her firing, leading the principal to call a public meeting to discuss Emi's future.

Jude shows us the sex tape in its entirety right up front, leaving nothing to the imagination and setting the stage for the tone of the film to come. It is naturally quite graphic, but the film makes it clear that 1) this is a married couple enjoying a moment of intimacy and 2) why should that matter? What's so inherently shameful about consenting adults enjoying each other's bodies? Have those who are condemning her done anything less graphic behind closed doors? Ultimately, however, the sex tape itself is beside the point. By the time the film reaches the climactic PTA showdown, Bad Luck Banging or Loony Porn begins to look uncomfortably like an American school board meeting in the time of COVID. Jude may be critiquing Romanian cultural hypocrisy here, but his target is universal.

The film's middle section sets the main plot aside completely to examine Romanian history and culture in ways that make it clear that a married couple having sex is the absolute least of their worries, and it almost becomes a kind of essay film railing against cultural contradictions that far exceed the central controversy in terms of impact and severity. And yet it is the sex tape upon which the mob fixates, and Emi finds herself on trial for the crime of having sex with her own husband. The mob of parents, with their "won't someone think of the children" mentality, completely lose sight of the humanity at the center of the debate, and Jude walks a tight line between moralizing and absurdism, constantly highlighting the ridiculousness on display.

It is at once hilarious and damning, a dazzling pastiche that really shouldn't work, but does anyway. Jude takes no prisoners here - the sight of masked and socially distanced parents heckling a teacher is such a charged image in 2021, and Jude knows it - turning the climactic showdown between Emi and the parents into a kind of modern Passion of Joan of Arc, where it becomes clear that the mob's determination to protect the children is in fact going to cause even greater harm to Romania, hyper-fixating on something healthy and natural while ignoring the societal rot that gave rise to their intolerance.

It's a vibrant, invigorating work, as frustrating as it is enthralling, and endlessly messy but completely captivating piece of political grandstanding about the "state of things" that feels at once essential and exhausting. And Jude refuses to grant us closure, posing three different endings because, well, we're not out of the woods yet. Looking back one day, we may come to view Bad Luck Banging or Loony Porn as one of the cornerstone cinematic texts of the COVID era, one that truly captures the chaotic inanity of our political discourse and our dogged determination to self destruct in the name of "freedom" and patriotism. It's a bold, bruising, altogether marvelous film.