Guillermo Del Toro's Nightmare Alley might be the best-looking mediocre film of the year. Del Toro's films are always a feast, but in his latest he's clearly making the most of his post-Oscar win budget to bring his adaptation of William Lindsay Gresham's novel to the screen, adapted  by Edmund Goulding in 1947, starring Tyrone Power and Joan Blondell. 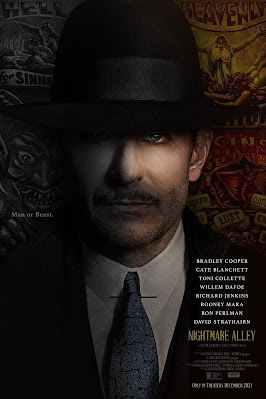 But Del Toro in prestige mode is not my favorite Del Toro, and Nightmare Alley is certainly more flash and less substance. It's a shame, because Del Toro has such a keen understanding of film noir and its tropes and themes, with its exploration of humanity's dark heart and the pitfalls of greed, but his version of Nightmare Alley feels more invested in shiny baubles than the evil that lurks in the hearts of its bland anti-hero. It's a wonderfully sordid tale of a man on the run who joins up with a seedy sideshow circus, who learns the art of mentalism before striking out on his own, a grave mistake that ultimately lands him in hot water when he picks a wealthy target with a dark past for extortion.

Del Toro is funneling a lot of resources to dress up this lurid tale, but the problem is that it's almost too pretty - everything is so slickly and so lushly designed that its style seems to stand in stark contrast to the darkness being portrayed on screen. One may argue that that's the point, but one can't help but feel that such a gritty story deserved more of a gritty treatment, a sense of faded grandeur rather than actual grandeur. That's not to say that Nightmare Alley isn't entertaining in its own way - the cast is uniformly excellent (even if Bradley Cooper's protagonist remains frustratingly inert), with Cate Blanchett's femme fatale psychiatrist all but stealing the show. But the film keeps the most interesting characters at the periphery, and as such it's hard to care about the sumptuous design on display - a pitfall that his last film, the Oscar winning The Shape of Water, deftly avoided.

Nightmare Alley leaves us wanting more at every turn, teasing us with deeper and darker ideas that it never allows itself to fully explore, as if Del Toro is somehow pulling his punches. It's a film of deeply pleasurable moments that never feel like more than the sum of its parts. There's no doubt it's a visual marvel, but at what cost? Del Toro is a master of conjuring fanciful worlds that somehow exist beyond the real, but in this case that eye for visual detail almost gets in the way, creating a very imperfect world that feels all too perfect.