Helming a remake of an Academy Award winning Best Picture doesn't seem like something a filmmaker like Steven Spielberg would undertake in 2021, but his West Side Story feels somehow classical and fresh at the same time, a vibrant cinematic celebration that is a showcase for the director's considerable talents. 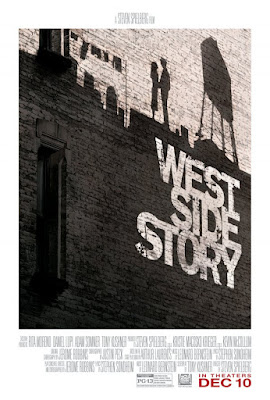 It's hard to believe that Spielberg, one of the most successful and popular filmmakers of all time, has never tackled the musical genre, considering his mastery of so many genres over the years. But if this turns out to be his one go at the genre, what a way to make a statement. Spielberg has always been a classically minded filmmaker, steeped in the traditions of Old Hollywood, and never has that been more clear than in West Side Story, a film that feels almost defiantly old fashioned, and yet vividly modern and alive. Spielberg, along with screenwriter Tony Kushner, keeps the film set in its mid-twentieth century, Upper West Side milieu, while highlighting the racial and economic divides that make up the story's backbone.

The specter of gentrification hangs over the film, as the white Jets gang vies for territory against the Puerto Rican Sharks, which comes to a head when Maria (Rachel Zegler), sister of Shark leader, Bernardo (David Alvarez), falls fo ar handsome Jet named Tony (Ansel Elgort). It's a modernized Romeo and Juliet, and Kushner does a fine job of keeping its already timeless themes even more relevant to our modern day. It's a "the more things change, the more things stay the same" kind of thing - and it's striking how many issues confronted in this 50 year old musical haven't aged a day.

Yet what makes West Side Story so incredible is how easy Spielberg makes all of this look. The man is a born filmmaker, every cut and every movement of the camera is so precise that it's thrilling to watch. Rachel Zegler's performance is also a star is born moment, a work of fierce power and delicate beauty - a true triple threat who can sing, dance, and act with ease. Elgort is nothing to write home about, but Zegler more than holds her own, with strong supporting turns from Ariana DeBose, Mike Faist, and Rita Moreno, who won an Oscar for her portrayal of Maria in 1961, returning to give the film an even greater emotional gravity as elderly shopkeeper, Valentina.

If you're wondering why Spielberg chose to retell this story in 2021, it all becomes clear the moment you're in the theater and realize you're in the hands of a master filmmaker. This is pure cinema, a dazzling, barnstorming musical reverie that stands toe to toe with its classic original to provide an incisive commentary on the futility of racial division when the true enemy is tearing down your community around you and putting up high dollar apartments far out of reach of the impoverished locals. The movies are back, baby, and Spielberg remains as essential a voice as ever.