When compared Paul Thomas Anderson's last film, Phantom Thread, his latest, Licorice Pizza, may appear like a somewhat minor entry in his filmography at first glance. It certainly doesn't feel as grandiose and thematically rich as some of his finest works; it is a somewhat languid hangout movie, after all. But Licorice Pizza is anything but a minor work, it's a layered and deeply insightful work that stands toe to toe with his masterpieces like There Will Be Blood and Magnolia, and reinforce Anderson's status as one of the most consistently thrilling filmmakers working today. 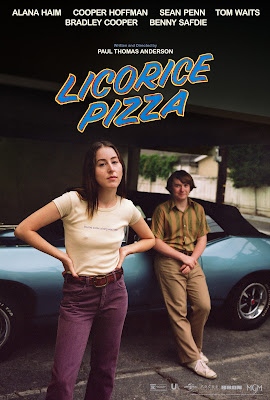 Unlikely connections between wounded and broken humans has long been one of the filmmaker's specialities, and in Licorice Pizza he finds one of his most unusual pairings - 15-year-old Gary Valentine (Cooper Hoffman) and 25-year-old Alana Kane (Alana Haim), a  pair who's age gap has certainly set Twitter tongues a-wagging, but Anderson's tale is far less problematic and nuanced than the numbers suggest. Valentine is an aspiring actor who never met a hustle he'd turn down, constantly starting new businesses and looking for new angles to make a quick buck. He sets his sights on Alana, a photographer's assistant who's helping with year book photos at Gary's school. She rebuffs his advances, but eventually gets worn down by his persistence, but the tentative friendship is constantly fraught by the space between them, and the naturally inequalities of not only their ages, but in what they both want out of life.

Licorice Pizza is such an indelible exploration of the aimlessness of youth - Anderson perfectly captures the languid sense of adolescent ennui that simultaneously feels inchoate and wondrous, full of promise and possibility. Gary is just on the cusp of this, while Alana is on her way out of it, transitioning into adulthood and looking for something more stable and "real," a way to contribute to something bigger than herself. In that way, Gary and Alana represent a kind of arc of adolescence, of the beginning and ending of growing up. That's not to say that Licorice Pizza is a coming-of-age film, but because it isn't, really. Instead it's something altogether more thoughtful, something both thorny and heartwarming, not so much a romance but a tale of two ships passing in the night, both at very different points in their lives and forging a tentative friendship while coming to terms with their inherent incompatibility.

It is, perhaps, one of the wisest and most astute explorations of human relationships in recent memory, acknowledging the imbalance between its protagonists and allows them to explore their world on their terms. Licorice Pizza is in many ways a big warm hug of a film, but Anderson also imbues it with an unmistakable sense of sadness, that inevitable wistfulness of nostalgia that nevertheless refuses to wallow in what could have been and looks lovingly on what things were. Unlike so many films that rely on nostalgia as a theme, Anderson acknowledges and explores its inherent flaws - were things really as good as we remember? Would our "what ifs" have actually worked out? There are certainly some legitimate questions to be asked about the central pairing, but Anderson and the text itself are clearly aware of the issues at play here. In fact, Alana continually holds Gary at arm's length for that reason. But Licorice Pizza is far more interested in their briefly converging arcs, intersecting for a moment as they search for their authentic selves. While they resemble each other very little in style and plot, I couldn't help but find myself recalling Terry Zwigoff's Ghost World, another film about a young person's search for authenticity in and endlessly fake world. Licorice Pizza gets at another kind of essential truth about growing up - it's scattershot, it's messy, timing is often way off, not every situation is a learning experience, and it can be a hell of a lot of fun. Anderson's chronicle is at once careless and carefree, probing and lackadaisical, a fanciful and intuitive exploration of the folly of youth whose ideas seem altogether too messy and open-ended for a world that demands its stories to be tidy and black and white. Rejoice in the chaos - lose yourself in the boundless pleasures of Licorice Pizza.