Jean-Luc Godard once said "All you need for a movie is a gun and a girl." While Godard went through many phases of his career, few films represent the range of styles and ideas that the filmmaker could conjure form that idea than Alphaville (1965) and Détective (1985). Made two decades apart, the films showcase Godard at two very different points in his life - Alphaville arriving at the height of his New Wave popularity and Détective in his post-Dziga Vertov group return to narrative filmmaking. 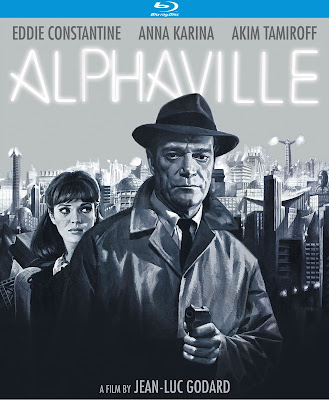 Alphaville marks Godard's sole foray into the genre of science fiction, but in true Godard form, no real attempt is made to set the film anywhere other than in 1965 France. Set on a faraway planet that is controlled by a fascist computer called Alpha 60 who has banned all traces of human emotion, Alphaville was filmed in and around the most futuristic parts of Paris, giving its political allegories a frightening sense of immediacy.

Our hero is Lemmy Caution (Eddie Constantine), a hard boiled private eye played by an actor less known for his acting chops than for his grizzled countenance. The Virgil to his Dante is Natacha Van Braun (Anna Karina), a citizen of Alphaville who has never known love. Godard imagines Alpha 60 as a croaking, inquisitive, unfeeling machine that is equal parts Big Brother and Hal 9000 - all-seeing but not quite all-knowing.

Yet what makes Alphaville so special, and so thoroughly Godardian, is the unique way in which it blends the classical Hollywood genres that had so fascinated Godard as a young critic at Cahiers du Cinema. While it's billed as science fiction, it bears little visual resemblance to any sci-fi film ever made, more closely recalling film noir and detective films, with stone faced Lemmy Caution an unlikely observer of a world without love. The film's beating heart is Karina, a woman whose emotionless existence begins to open up to a world of unknown possibility. Karina would only make two more films with Godard (Pierrot le Fou and Made in U.S.A.) before her relationship with the filmmaker ended, and he began to descend into radical Maoist politics, but here the two seem in perfect sync, working on perhaps the final film not overshadowed by Godard's quickly radicalized worldview, taking elements of classic Hollywood and twisting them into a haunting foreshadowing of the Godard to come, one consumed with dismantling fascism through his art. 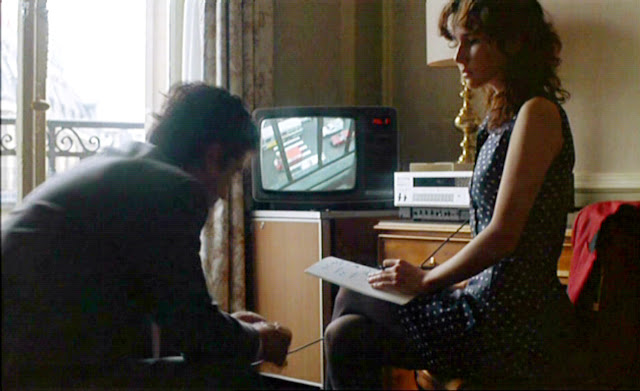 Détective is a different animal entirely, one often described as a detective film but one that bears no recognizable resemblance to the genre whose name it bears. Coming two decades after Alphaville, Détective is perhaps one Godard's most inscrutable films of the period. Set in a luxury hotel in France, the film centers around two house detectives (Laurent Terzieff and Jean-Pierre Léaud) who are investigating the mysterious death of a prince. A cast of disparate characters - a boxer, a mob boss, a husband and wife on the rocks, populate the hotel and exist on the periphery of the story, if you can call it that. Godard's films of the 80s and 90s mostly eschewed narrative in favor of a kind of puzzle aesthetic, existing squarely in world all their own. 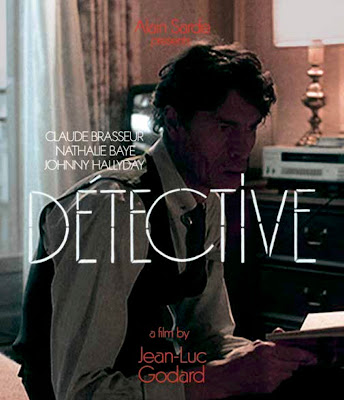 It's somewhat ironic, then, that Détective was partly made as a way to raise money to make Hail Mary (1985), but producers who were looking for another genre deconstruction by Godard in the vein of his classics Breathless and Band of Outsiders would have been gravely disappointed by what the filmmaker delivered here. It presages Godard's fascination with video with its liberal use of closed-circuit TVs and videocassettes, an aesthetic that has informed the collage nature of his more recent work in his films such as Goodbye to Language (2014) and The Image Book (2019).

It's a technique that allows the audience to step into the role of detective through the constant surveillance under which the characters find themselves. But it lacks the sly elegance of his contemporary films from the period like First Name: Carmen (1983) or even the mysterious beauty of Helas por moi (1993). And yet Godard films are never anything less than fascinating, and the singular vision of societal rot in a building meant to represent the ultimate in glamour is not lost in the film's shifting perspectives. He may keep a dispassionate distance from the world he creates, but Godard is always probing, exploring, and interrogating the cinematic medium. Nowhere is the dichotomy between his approaches to similar ideas over the course of his career more sharp than in Alphaville and Détective. Both may have a girl and a gun, but the way they are deployed could not be more different - and yet one can't help but feel that this is the same Godard exploring and deconstruction genres, only refusing to repeat himself in his pursuit of pure cinema.


Alphaville and Détective are now available on Blu-Ray and DVD from Kino Lorber.