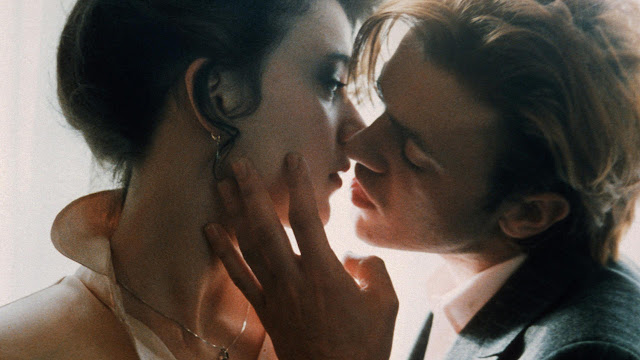 Irreverent, self-referential, and gleefully misanthropic, Jean-Luc Godard's 1983 film, First Name: Carmen, was released near the beginning of the legendary raconteur's return to feature filmmaking in the early 1980s. In the decade since his radical left-wing period with the Dziga Vertov group in the early 1970s, the filmmaker mostly concerned himself with documentaries and experimental short films before reuniting with long-time cinematographer Raoul Coutard (Breathless) and writer Anne-Marie Miéville for this loose adaptation of Bizet's opera - Carmen. 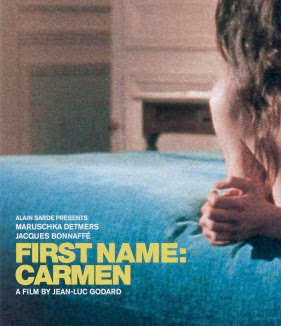 Once the French New Wave's most iconoclastic Enfant terrible, Godard reinvents Carmen as something of a domestic terrorist (whose political motivations are never fully revealed) who falls in love with a bank guard, who becomes something of a patsy-cum-parter in crime. Carmen invents a fake movie as a front for her organization, and approaches her doddering Uncle Jean (played Godard himself in full-on self-parody mode) about using his home as a location.

Jean, a "washed up" film director, gets dragged back into commercial filmmaking kicking and screaming, making no bones about his disdain for the whole enterprise. Godard pokes gentle fun at himself, rambling on about his Maoist days ("he's not in favor anymore") and shaking his fists at the "kids these days." But Godard is nothing if not self-aware, and he drops all pretense of being anyone else, as characters begin to call him "Mr. Godard" by the end of the film.

Rather than his trademark jump-cuts, Godard works toward a similar effect with sounds, blending diagetic and non-diagetic music to contrast against the action, often dropping it in and out seemingly at random. First Name: Carmen is Godard at his most playful, tweaking the system that has called him back in and poking holes in society's sacred cows (he even critiques Shakespeare). This is absolutely the Godard we all know and love to hate; arrogant, defiant, and yet unendingly fascinating. First Name: Carmen is at once the kind of Hollywood gangster picture Godard used to worship, but also a deconstruction and dismantling of the same. He ends with the coda: "In memoriam small movies." Much as he did in Weekend (1967), Godard is railing against the very idea of cinema and its place in our world. What exactly he's trying to convey is anyone's guess, because at its core First Name: Carmen is a really just a bit of trolling. But nobody does it like Godard, perhaps the greatest troll in cinema history - and he's certainly in rare form here. 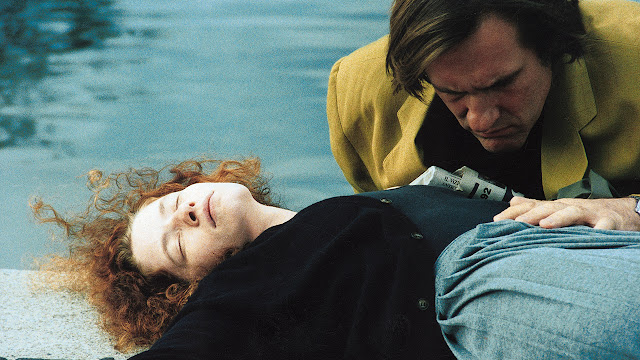 Godard tackled the Greek myth of Alcmene and Amphitryon for this 1993 meditation on the nature of the divine. Wracked by a troubled production, in which star Gerard Depardieu stormed off set never to return (and never to be replaced), Hélas pour moi (Oh, Woe is Me) is at once one of Godard's most deeply felt and most obfuscating works. 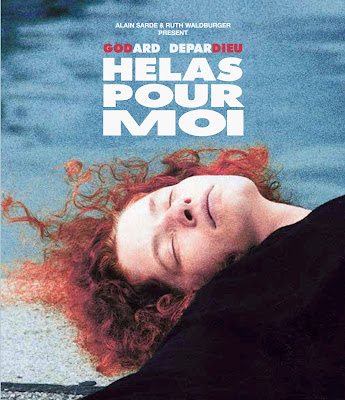 The filmmaker himself would later become one of the film's chief detractors, writing it off as a failure despite widespread acclaim in France  (Cahiers du Cinema named it one of the best films of 1993). It's certainly a muddled work, as Godard restructured much of it after Depardieu left the project. Hélas pour moi centers around a man named Simon (Depardieu) who is possessed by the spirit of God so that God may experience and examine human life through his marriage with Rachel (Johanna ter Steege). In order to fill the gaps left by his falling out with Depardieu, Godard frames this drama in flashback, as a book published named Abraham Klimt (Bernard Verley) investigates reports of God's arrival on Earth.

It's a wildly experimental work, to be sure, marked by some of the most gorgeous imagery Godard ever produced (courtesy of cinematographer Caroline Champetier). And yet, its ideas are so scattershot that they never reach the level of spiritual focus achieved by Bresson, who was a clear influence here. Godard is probing and exploring, but his musings are too opaque to be fully engaging. His usual experimentations with non-diagetic sound design that was so integral to this period of his career seems somewhat subdued, still very much present but of less thematic import. The film seems somewhat lost, at once a criticism of humanity from the point of view of God (one of Godard's most vain provocations) and an existential treatise on cinema and international politics, informed by the global conflicts happening in the early 1990s. It's undeniably fascinating work, but as was Godard's wont, especially during this period, his attempts to radically reinvent the cinematic language don't always jell with the ideas he's attempting to interrogate. 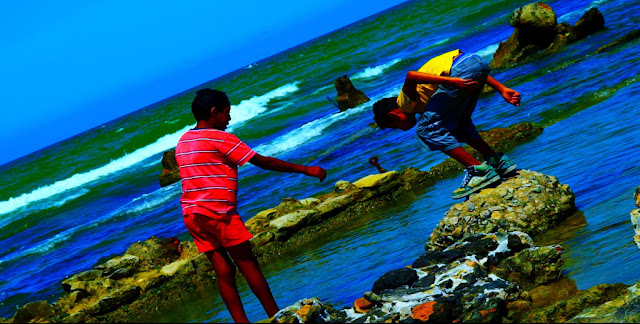 Godard's The Image Book is at once perfectly at home with his other late-period collage films such as Film Socialisme and Goodbye to Language, and yet completely unlike anything the 88-year-old Nouvelle Vague iconoclast has ever made. It's part of the filmmaker's quest to investigate and reinvent the cinematic language, a life-long passion for Godard at least since 1967's Weekend, in which he infamously declared the "end of cinema." 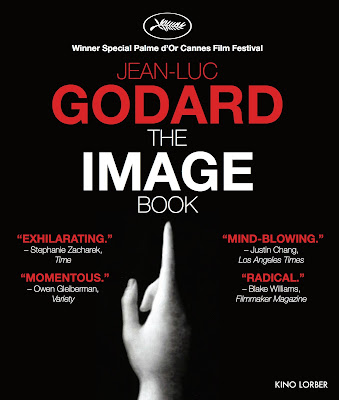 His last film, Goodbye to Language (2014), similarly tried to redefine the cinematic language, a brazen attempt to force viewers to reevaluate the very way we watch and engage with movies. There his medium was 3D, experimenting with the prevalent gimmick of the day to explore the multiple dimensions cinematic plane. In The Image Book  he moves in a different direction entirely. Now having re-written cinematic language, he seeks once again to make audiences redefine their preconceptions about the confines of the film frame and explore the dynamics of the moving images.

Through re-tooled images from cinema history (taken from such films as Luis Buñuel's Un Chien Andalou, Nicholas Ray's Johnny Guitar, Hitchcock's Vertigo, and Ridley Scott's Black Hawk Down) and an often shifting aspect ratio, Godard is quite literally making the audience look at these familiar images from alternate points of view. He even goes so far as to repurpose images from his own films, (including bits of Hélas pour moi) in what could be seen as either an act of supreme ego or self-interrogation. It's an effect created by the way Godard transfers films from VHS to his DV camcorder, as the camera attempts to adjust to the different aspect ratio, yet this digital "mistake" was purposefully left in.

The value of these images, in fact the very nature of their beauty (or lack thereof) lies in our own perception of them. Godard gives us the tools to decode them, but intentionally leaves us without a guidebook. Through the various lenses he places in front of them, be they digital imperfections, analog glitches, or simply the fog of time, The Image Book asks us to look at the world around us in ways we've never before considered. It's an endlessly fascinating and somehow wistful work, a career summation by a legendary iconoclast who continues to reinvent himself well into his ninth decade of life, now looking back at a life's work and asking "what was it all for?" The answer lies somewhere buried in the bleary fragments of images recorded from Godard's VHS player, a radical reinvention of cinematic language that will be studied and appreciated for decades to come.


The Image Book is now available on Blu-Ray and DVD from Kino Lorber. First Name: Carmen and Hélas pour moi will be released on June 18.