Going into a Quentin Tarantino movie, one usually has a certain set of expectations: there will be copious amounts of violence, creative (and constant) use of curse words, extensive references to older films, and lately, a new spin on familiar history. 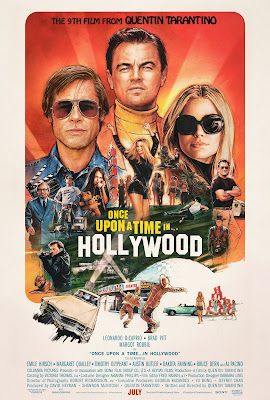 His latest film, Once Upon a Time in Hollywood, checks all those boxes, but for the first time since perhaps 1997's Jackie Brown, there's something much deeper and more melancholy at work here. Tracing the story of a former TV western star named Rick Dalton (Leonardo DiCaprio) and his faithful stuntman, Cliff Booth (Brad Pitt), Once Upon a Time in Hollywood transports us back to the summer of 1969 in the city of dreams, where anything was a possible but change was inevitable.

Dalton's hit show, Bounty Law, has been cancelled, and he's kept his career spluttering along by taking on one-episode roles as the villain of the week in other TV shows. His agent, Marvin Schwarzs (Al Pacino), wants him to start taking roles in spaghetti westerns, but Dalton isn't ready to give up on Hollywood yet, even if Hollywood seems ready to give up on him. But as his star is descending, the star of young Sharon Tate (Margot Robbie), here depicted as an unknowable young ingenue full of untapped promise, is rising. Her story parallels Dalton's - she's got some major supporting roles in some new films, she's married to Roman Polanski, one of the hottest up-and-coming filmmakers in Hollywood, and she seems poised on the brink of stardom. It is against this milieu that Once Upon a Time in Hollywood paints an indelible portrait of a very specific time and place, putting us on an inevitable crash-course with the subsequent rise of Charles Manson and his cult, whose murderous rampage in 1969 marked the end of an era and the bright promise of the counterculture, putting a dark period at the end of a turbulent decade.

This being a Tarantino film, the fateful encounter between members of the Manson family and Sharon Tate doesn't materialize in the way we expect, allowing the filmmaker to create an alternate, more hopeful version of history. In this alternate timeline, it is old Hollywood that steps in to save the new, offering a fictional second chance to a promise cut short in its prime. Tarantino's films have always been vibrant pastiches of genres of a bygone era, but here his genre fetishism comes in service of a deeper purpose. This is nostalgia done right; “Once Upon a Time in Hollywood” is a film filled with longing and regret, sadness and hope. It’s a requiem for a past that never was and a dream for a future that will never be. Here, Tarantino evokes the languid pacing of the spaghetti westerns of Sergio Leone and Sergio Corbucci, using their tragic anti-hero archetypes in a way that's disarmingly heartwarming.


It's almost as if Tarantino is grappling with his own anxiety about pending irrelevance and ennui while honoring the great filmmakers of the past whose work has been so important to forming his own career. Tarantino famously proclaimed that he would retire after making 10 films, and for those keeping score at home, Once Upon a Time in Hollywood is his ninth (if you count the two volumes of Kill Bill as one film). The result is perhaps the most beautiful, wistful, and touching thing he has ever directed. The unexpected gravitas and lugubrious self-reflection is something quite new for the filmmaker, displaying a sense of mournful contemplation in a sanguine tribute to the heroes of his childhood.

Once Upon a Time in Hollywood is easily Tarantino's most deeply felt film to date. Beneath his instantly recognizable sense of dark humor, it's a pensive and haunted reverie of the fading shadows of old Hollywood, where dreams unfolded in larger than life images on a flickering screen, created by much smaller men and women who were more fragile and flawed than they ever let on.