At the end of last year's Avengers: Infinity War, Nick Fury (Samuel L. Jackson) managed to send out a mysterious distress signal just before disappearing when Thanos wiped out half the life in the universe. The signal was to Carol Danvers (Brie Larson), who now has the distinction of becoming the first woman to headline a film in the Marvel Cinematic Universe. 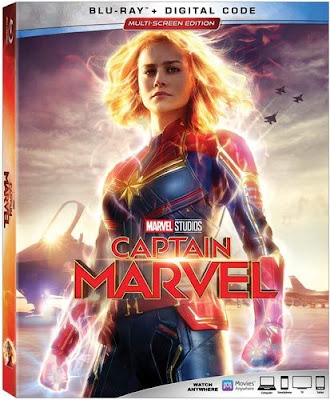 It's an important milestone for sure, and Larson more than rises to the occasion. The film around her, on the other hand, is more or less standard Marvel fare - not bad by any means, but it doesn't really bring anything new to the table either. Unlike the other solo hero films in Marvel's "Phase 3," Doctor Strange, Thor: Ragnarok, and especially Black Panther, Captain Marvel mostly sticks to the established Marvel formula, resulting a middle-of-the-pack film that never really asserts a personality of its own.

That's not to say that Captain Marvel isn't a lot of fun - because it certainly is. Set in the 1990s, the film introduces Danvers as a Kree warrior who discovers that her roots actually lie on Earth, where she travels to help prevent an evil race of shapeshifters known as Skrulls from tracking down a light speed engine developed by her former mentor, Dr. Wendy Lawson (Annette Bening). Upon arrival, she meets Shield Agent Nick Fury, some 25 years younger than when we last saw him in Infinity War, young, fresh-faced, and totally oblivious to the extraterrestrial threats that will soon face the planet on a regular basis.

Captain Marvel is essentially a buddy cop film, with Larson and Jackson playing off each other to great effect. The de-aging special effects on Jackson are truly incredible, allowing Jackson to believably play a much younger version of his character, even younger than when we first met him more than a decade ago at the end of 2008's Iron Man. But the heart of the film are the more intimate character moments shared by the film's women. Larson's rapport with Lashana Lynch as her best friend, Maria, and with Bening's benevolent scientist, make for some moments of disarming beauty. It's rare to see a superhero film take the time to allow the characters (and the plot) to breathe, but it between its exposition-heavy dialogue scenes about intergalactic wars, Captain Marvel manages to take a moment to examine not just who its protagonist is, but who she is as a woman, and how she relates to the woman around her.

That's what makes Captain Marvel strong. Here is a character that has spent her entire life being trained to control her emotions, only to discover who true power when she unlearns society's mandates. It's inspiring to see a woman take center stage, giving young girls everywhere a chance to see themselves represented as a powerful heroine on screen. While the film itself may not be the best or most original film in the Marvel oeuvre, it will certainly be something quite special for many. Yet one can't quite help but feel that something this groundbreaking should have felt a bit more fresh and adventurous than it ultimately does, as it spends more time setting the stage for the next Avengers film and establishing its place in the MCU than it does asserting its own personality.


The extras on the Blu-Ray release tend to be the usual fawning featurettes with cast and crew offering generic platitudes about the experience - but a few unique shorts really set this disc apart. An amusing gag reel and a 90's flavored short centering around Captain Marvel's cat (or Flerken), Goose, is a must for fans of the film (and cats). Nothing really new here, but the extras on Captain Marvel add a bit more pizazz than the usual Blu-Ray bonus features.