The original Toy Story trilogy represents not only one of Disney/Pixar's finest achievements, it's also one of the most perfectly crafted cinematic trilogies ever made. The arc from the first film to the last is so beautifully executed that it seems only natural that the prospect of a Toy Story 4 was initially met with some skepticism. 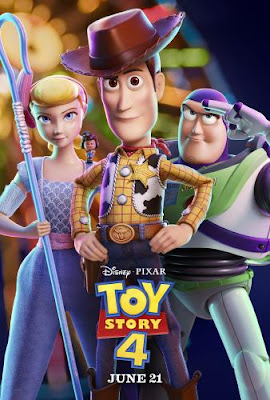 On the one hand, the resulting film isn't bad; Pixar rarely makes films that are outright poor, but despite some cute moments and an appealing cast of new and familiar characters, it never quite shakes the feeling of being wholly unnecessary. At the end of Toy Story 3  a grown up Andy left his beloved toys with a young girl named Bonnie before heading off to college, leaving a generation of filmgoers in tears, bidding farewell to an era and the childhoods of many who grew up with Woody, Buzz, and the rest of the Toy Story gang. Toy Story 4 picks up where that film left off, with the toys adjusting to their new lives in Bonnie's bedroom.

But the prospect of Bonnie similarly growing up is looming large, and Woody (Tom Hanks), now often relegated to the closet while Bonnie plays with other toys, feels a special need to take care of her much as he did Andy. When Bonnie makes a new toy named Forky (Tony Hale) out of a spork during arts and crafts time at school, Woody takes him under his wing despite his vehement protests that he is not a toy, but little more than a piece of trash. When the pair become separated from Bonnie's family during a road trip, Woody must do everything in his power to rescue the beloved Forky and return him safely to Bonnie, reuniting with old friends and making quirky new ones along the way.

The idea of a homemade toy finding a home among Bonnie's "real" toys is an appealing one, but it's a conflict that is resolved all-too-quickly in favor of the film's action/adventure plot. The film's villain, a creepy antique doll named Gabby Gabby (Christina Hendricks) who covets Woody's voice box, is perhaps one of Pixar's most intriguing antagonists. Rather that follow their usual formula of revealing a seemingly benign character to be evil, Toy Story 4 takes the opposite approach with Gabby Gabby, giving her a poignant twist that subverts what Pixar has conditioned audiences to expect.

Nevertheless, there's a strange sense of "been there, done that" to the whole thing. Toy Story 4 is moderately engaging, and it's always nice to spend time with these characters, but it mostly feels like an afterthought to the original trilogy, attempting to take the story in new directions that it didn't really need to go. The existential drama of toys trying to find their purpose and their place has given the series some truly gut-wrenching emotional moments, but nothing in Toy Story 4 reaches the level of Toy Story 3 s crushing denouement. It feels as though we've already said goodbye to these characters, so saying goodbye again doesn't have quite the same impact as it may have otherwise. It's as if we just said a tearful goodbye to a relative and watched them drive off into the sunset, only to return to dash back into the house really quick because they forgot their phone. It's nice to see them again, and we all had a good laugh, but the previous goodbye was much more emotionally satisfying.