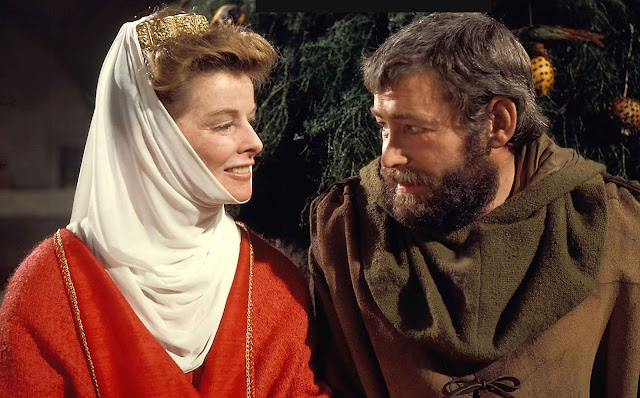 At a time when viewers eagerly await the latest Machiavellian intrigue, backstabbing, and backroom drama of TV shows like Game of Thrones, House of Cards, and The Crown, I'm a bit surprised that that some eager producer hasn't tried to mine James Goldman's play, The Lion in Winter into a series.

I'm glad they haven't, because Anthony Harvey's 1968 film adaptation remains a towering achievement, packing more delicious drama into two hours than an entire season of Game of Thrones. Peter O'Toole's aging medieval monarch, Henry II, is surrounded by so many conniving relatives that the story reaches almost Shakespearian heights, as the king's sons vie for their place as the heir to the kingdom, and his estranged wife, Eleanor of Aquitaine (Katherine Hepburn) pulls the strings from behind the scenes. 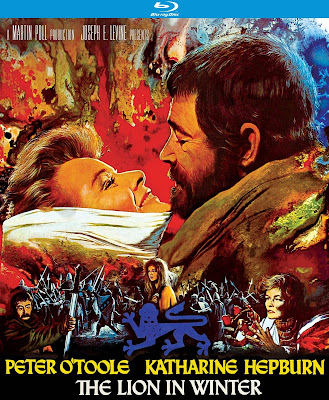 As Henry II, O'Toole skulks the parapets of his lonely castle, dwarfed by the battlements and the drab vaulted ceilings, his crown and the demands of history weighing heavily upon his shoulders. His son, Richard (Anthony Hopkins), is Eleanor's favored, and believes he is entitled to his father's throne, while his brother John (Nigel Terry) is a simpleton favored by his father out of pity. The third brother, Geoffrey (John Castle) lacks personality and is little more than a pawn in his parents' machinations. Henry dreams of annulling his marriage to Eleanor to marry his consort, Alais (Jane Merrow), but knows Richard has always loved her. All the while, his children plot with Philip II of France (Timothy Dalton) who is looking for his chance to strike at England and bring his old rival Henry down.

It is the stuff of high drama, and Harvey grounds it in a kind of gritty realism that sets it apart from many of the historical epics of its day. You can almost feel the chill of the drafty castle halls, its grounds overrun with dirt and grime, livestock and hay. The Lion in Winter never glamorizes medieval life - "It's 1183," Hepburn deadpans, "we're barbarians." There's an almost fourth-wall breaking slyness to Hepburn's character, who seemingly understands her place in the world around her through a historical context, and yet she plays it so brilliantly, she's a woman in total control of her fate who refuses to be a pawn in a man's game of thrones. Hepburn won an Oscar for her towering performance, trying with Barbara Streisand in a shocking and rare twist. The grand dame of cinema always chewed the scenery with such relish, and yet never was she as bold, tempestuous, and even sexy as she was here. She was Cersei Lannister before anyone ever knew who that was.

Despite rumors of behind-the-scenes tensions, O'Toole matches her moment for moment, although O'Toole would famously go Oscar-less until his death in 2013. Looking back on that cast, with O'Toole and Hepburn at the height of their respective careers, and Hopkins and Dalton just starting their's, is all the more impressive in hindsight. Goldman, adapting his own play, gives each such magnificent dialogue on which to feast, pulling the audience back and forth in a never-ending series of double-crosses and broken deals. The new Kino Blu-Ray has resurrected the film in glorious 4K, bringing the chilly castle halls and Hepburn's brightly colored dresses to breathtaking life. It's a treatment long overdue for one of Hollywood's great epics, a film often overlooked in favor of some of the era's flashier spectacles. Yet few have equaled The Lion in Winter for sheer emotional power, taking familial love and hate to operatic heights on the wings of Goldman's electrifying screenplay and John Barry's magisterial, Oscar-winnig score. Never has such intrigue felt so grounded or so painfully raw.