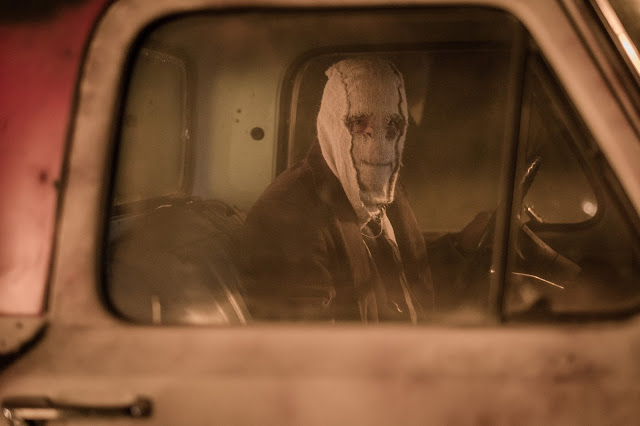 Ten years have passed since the release of The Strangers, a tense, Hitchcockian home invasion horror film that turned random crime into the stuff of nightmares. It all felt frighteningly plausible, a couple terrorized by a trio of murderers whose only motivation was that "you were home."

We never really got to know the couple at the center of the film, which worked in the film's favor, allowing the audience to easily project itself into the film. For the belated sequel, The Strangers: Prey at Night, not only does the film spend more time getting to know the characters (both a blessing and a curse), it also is a complete stylistic 180 from its predecessor. Whereas The Strangers was a quiet, slow-building thriller, Prey at Night is a garish 1980s throwback, complete with neon colors and a pulsing soundtrack replete with ubiquitous 80s pop (not to mention a John Carpenter-esque score by Adrian Johnston). 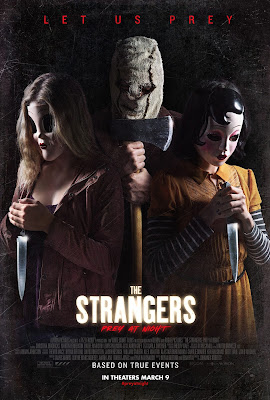 The masked killers themselves, so chillingly human before, now possess borderline superhuman abilities not unlike Jason Voorhees, which keeps with the 80s theme but makes them far less scary. Their random targets this time is a family on their way to take their troubled teenaged daughter, Kinsey (Bailee Madison) to boarding school. They stop overnight at a trailer park and campground run by a relative, only to find themselves running for their lives.

You have to give Prey at Night credit for at least trying not to rehash the original, charting its own course with its own unique tone. Yet despite its aesthetic departures, it's just not particularly interesting. Its surface level attempts at character development actually make the film less scary. Conventional wisdom tells us that getting to know the characters will actually make us feel for them though, but the emotional connections it creates actively take away from the original's harrowing anonymity.  The same goes for the villains, which seem to be everywhere all the time. Prey at Night explores their vulnerabilities, allowing our heroes the chance to fight back against their random sadism, but in so doing ask for a suspension of disbelief that wasn't necessary in The Strangers.

That's not to say that The Strangers was a great film, but there was something quietly effective, and hauntingly real, about its eerily unexplained sense of random violence without explanation. Prey at Night doesn't try to rationalize it, but it does try to ratchet up the stakes, and the result is a significantly diminished return. Not even its climactic homage to The Texas Chainsaw Massacre can elevate it over typical slasher fare, and its final attempt at a twist ending makes even less sense than the original's misguided jump-scare stinger.

80s nostalgia is all the rage right now, and director Johannes Roberts certainly tries to elevate the material (the soundtrack is probably its strongest asset), but it doesn't make a lot of sense for a film set in modern day, and never quite escapes the feeling that we've seen all this before. This is one horror franchise that would have been best left as a one-off, its killers unexplained, its outcome uncertain, its masked murderers forever anonymous. Instead, Prey at Night tries to expand the mythology of characters that were best left alone.