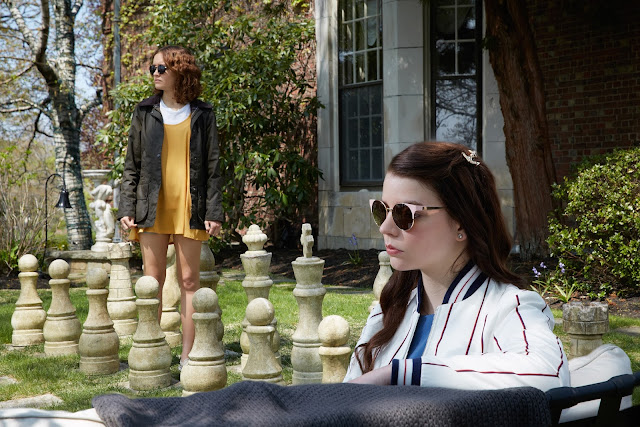 The idea of privilege, or unearned social advantage based on circumstances outside one's control, has been at the forefront of the national discussion over the last few years, And yet somehow, the idea of class privilege as part of the intersectional puzzle of human identity often gets overlooked. Privilege, especially unexamined privilege, can be dangerous, and in his debut feature film, playwright Cory Finley explores the idea of class privilege as an agent of isolation that leads to a shocking lack of empathy.

Thoroughbreds explores the relationship between two former best friends who were driven apart by tragedy. Amanda (Olivia Cooke) is a teenage girl who was sent to a psychiatric hospital after brutally slaughtering her own horse. In contrast, Lily (Anya Taylor-Joy) seems to have the perfect life:  a beautiful home, good grades, and a prestigious internship. On the surface her life is idyllic, but underneath the reality is much different. 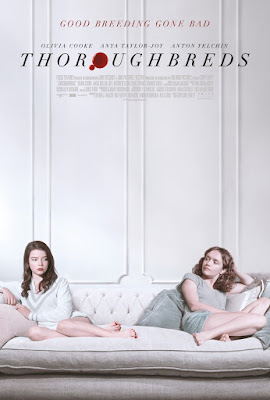 Amanda's mom pays Lily to spend time with her, which Lily does reluctantly. Amanda's lack of feelings makes her difficult to be around. She's abrupt, awkward, and often brutally honest. But Lily soon discovers that she enjoys being around someone without feelings, and it isn't long before she starts looking for an escape from her wealthy stepfather (, a grade-A asshole who has decided to ship Lily off to boarding school so she can experience the real world outside of her sheltered wealthy upbringing. So she and Amanda hatch a plan to kill him, with the help of a small time drug-dealer (Anton Yelchin, in what would tragically be his final performance).

Thoroughbreds makes it clear that Amanda suffers from an undiagnosed lack of empathy, but her clinical sociopathy is nothing compared to Lily's complete lack of human of feeling. Amanda has the excuse of being mentally ill, but it is Lily who is the true sociopath; cold, unfeeling, and completely disconnected from reality. The film makes us hate her stepfather (who is an undeniable brute), but it also recognizes that he may have a point - that Lily's lack of interaction with the real world has made her totally unable to deal with actual problems. Taylor-Joy, who after the incredible one-two punch of The Witch and Split has quickly become the new horror "it-girl," plays her with such fire that we almost forget we're watching a performance. It takes a truly skilled actor to have enough empathy to portray an otherwise likable character who so convincingly lacks that trait, and yet Taylor-Joy pulls it off admirably. She makes us feel for her, even as we are repulsed by her own privileged disconnect with humanity.

What makes Thoroughbreds so skillful is how it takes what is essentially a horror film and makes it feel like a teen drama. It never feels like a film with an agenda, yet it so indelibly creates an insular world where its decidedly white, wealthy characters seemingly have no concern or knowledge of the actual problems going on around them. Amanda is a wounded person, yet Lily begins to see her as a means to an end. The girl has known violence and has no feelings, why should she not help Lily make a drastic solution to a temporary, first world problem? While Erik Friedlander's chilling score sets us on edge, Finley sets the stage for a remarkable and deeply unnerving exploration of unexamined privilege that doesn't care who it takes down in order to achieve its ends. It's not a portrait of evil, it's a portrait of a world where a self-centered worldview completely wipes away empathy. In that way, it's a disturbing and powerful critique of Randian Objectivism, whose social Darwinism celebrated a culture of selfishness. It's an impressive debut for Finley, whose skills as a writer have helped him create a film that, much like its characters, is much more than it appears to be on the surface, making unchecked privilege the source of unspeakable inhumanity.