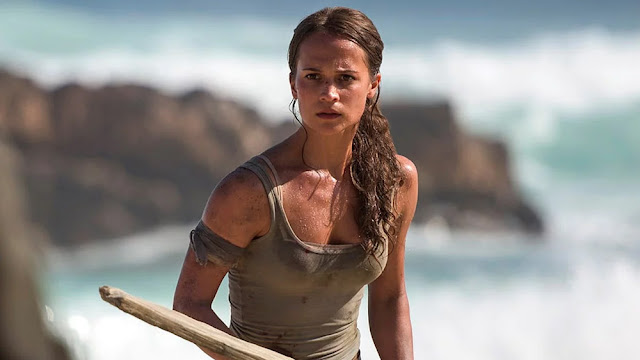 Based on the popular series of video games, the original Lara Croft: Tomb Raider (2001) was about as entertaining as watching someone else play a video game. A cartoonish mix of Indiana Jones and The Mummy the film felt like an extended cut scene, its characters devoid of personalty and its action sequences lacking any real stakes.

The new reboot by Roar Uthaug (The Wave) seeks to rectify some of those issues, and it mostly succeeds on its own terms. It is a marked improvement on the early 2000s action hokum of the original film, focusing less on Croft (Alicia Vikander) as an object of gamer geek lust, and more as a human being in her own right. Vikander's Croft is strong yet vulnerable, a fallible heroine whose power comes from her will to survive and preserve her family, rather than through superhuman skills. 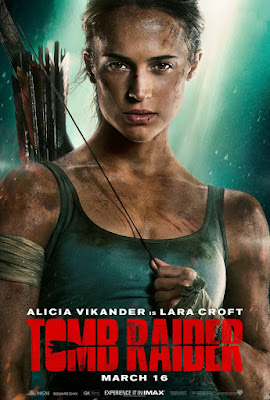 Once again, the plot borrows liberally from Indiana Jones, with much of the climax pulled straight out of Indiana Jones and the Last Crusade. Croft's father, Lord Richard Croft (Dominic West), has disappeared, and left behind a mysterious trail of clues as to his whereabouts. Lara, unwilling to accept his death, decides to track him down, and uncovers an international plot to unearth the tomb of an ancient Japanese empress said to possess untold powers. By the time she arrives on the island, she finds she has been beaten by Mathias Vogel (Walter Goggins), an agent for a clandestine organization that hopes to harvest whatever power lies in the empress' hidden tomb, and unwittingly brings him the final piece he needs to solve the puzzle of its whereabouts.

Tomb Raider is more grounded in reality than its predecessors, and while it still occasionally succumbs to the temptation to emulate some of Croft's high-flying video game stunts, it gives the film an added sense of danger and urgency. Croft isn't doing battle with supernatural creatures or giant robots, and the results are far more interesting as a result. It's the kind of blandly inoffensive action film that is watchable but not particularly memorable, and then has the gall to setup a character as a villain at the last minute whose true identity probably would have made the rest of the film much more interesting.

Still, Vikander is a fantastic as Croft, displaying far more personality than Jolie's aloof, one-dimensional take on the character. Uthaug's insistence on framing Croft as a person rather than a sex object, along with Vikander's spunky performance, makes her a more well-rounded creation, and it's easier to root for her as a result. Uthaug isn't reinventing the wheel here, but he directs with a strong eye for action, giving the action sequences weight and purpose within the framework of the plot, something the original film never even tried to do. It's refreshing to see a video game adaptation that isn't just trying to be a video game on the big screen.

Ultimately, I was more intrigued by the possibility of the sequel that the film's ending sets up than I was by the plot of this film. Tomb Raider  creates a solid base on which to build, but the prospect of a sequel lead by Kristen Scott Thomas is far more tantalizing than anything we see in this film.