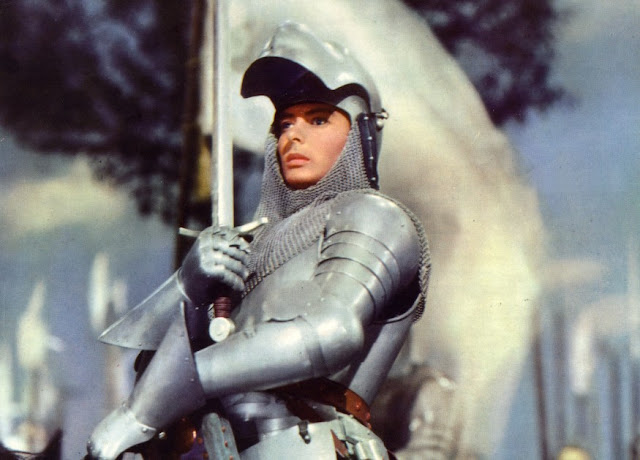 Joan of Arc was something of a passion project for its star, Ingrid Bergman. Bergman had been trying to get a big screen adaptation of Maxwell Anderson's play, "Joan of Lorraine," in which she originated the role of Joan, off the ground for years. While RKO briefly considered filming it 15 years prior with Katherine Hepburn in the title role, a string of flops left Hepburn with a "box office poison" scarlet letter, and the project was shelved until Bergman convinced them to adapt Anderson's play. 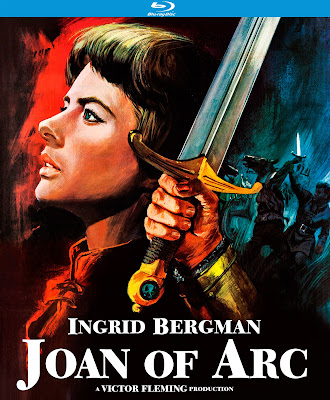 Unfortunately by that time, the 33 year old Bergman was too old to play the 19 year old Joan of Arc, but that doesn't stop her from giving an impassioned, Oscar-nominated performance. It's astonishing to realize that Maria Falconetti was actually 36 when she tackled Joan of Arc in Carl Dreyer's 1928 silent masterpiece, The Passion of Joan of Arc, and yet there's a vulnerability in her immortal performance that belies her age. Lost in oversized armor, Bergman's performance often seems drowned out by the sheer size of the production. Director Victor Fleming (The Wizard of Oz, Gone with the Wind) mounts an impressive spectacle, but it's hard not to compare the film to Dreyer's work, unfair a comparison as that may be. Fleming tips his hat to Dreyer in a climactic close-up of Bergman's tear-streaked face, but by pulling back and taking a bigger picture look at the life of Joan of Arc, Fleming sacrifices emotional heft for epic spectacle.

The siege of Orleans is an undeniably spectacular sequence, featuring a massive cast and recalling Fleming's sweeping work in Gone with the Wind's burning of Atlanta. And yet for all its pomp and circumstance, sumptuous costumes and lavish production design, Joan of Arc feels strangely flat. Bergman is far better during the trial sequences than she is in the battle scenes, but one never escapes the feeling that perhaps she was miscast (Jennifer Jones would have been fantastic in this role). She's just too regal, too much of a star to really sell the idea of a plainspoken, backwoods farm girl. She's certainly a better choice than Hepburn would have been, and she throws herself into Joan even if she never quite sells it.

It's clear that this was a passion project for Bergman, and the film would go on to be Fleming's final film as a director (he died six months after the film was released). It certainly looks wonderful, the new 2K restoration featured on the 70th anniversary edition Blu-Ray from Kino Studio Classics is something to behold. The film's matte paintings are especially impressive, giving the film a grand scope. Yet Joan of Arc stands irrevocably in the shadow of superior films, hitting the highlights of St. Joan's life without ever really digging deep into her motivations. It's a solid studio production from the golden age of the Hollywood studio era, but it never really finds Joan's emotional center, opting instead for empty spectacle that doesn't seem to understand her unique spiritual legacy.