Christian films can often be separated into two distinct categories. There are films that explore the essence of faith, and its effect on humanity - I'm thinking of films like Martin Scorsese's Silence and The Last Temptation of Christ, Carl Dreyer's The Passion of Joan of Arc, Bruno Dumont's Hadewijch and Hors Satan, Terrence Malick's The Tree of Life, Jessica Hausner's Lourdes, and Xavier Beauvois' Of Gods and Men.

And then there are films with a clear agenda, seeking only to proselytize like feature length sermons that are already preaching to the converted - direct-to-video quality films like God's Not Dead, Son of God, and Do You Believe. Unfortunately, most recent Christian films fall into this latter category, seemingly unable to balance their story with a desire to evangelize and convert. While films in the former category are often filled with doubts, wonder at the mysteries of faith, and a sense of philosophical introspection, the latter paints an easily digestible picture of a black and white world where Christians are persecuted saints waging war against an obviously evil world filled with atheists, Muslims, liberals, and other Fox News boogeymen. 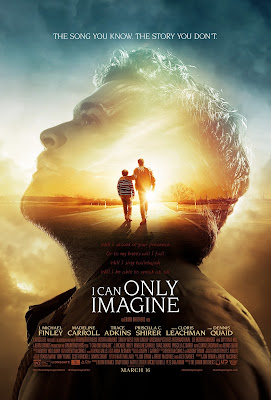 I Can Only Imagine mostly avoids many of the pitfalls of the latter category. While it certainly shares more in common with God's Not Dead than it does Silence, it eschews many of the former film's execrable pitfalls to frame its real-life tale of the biggest Christian radio hit of all time as a father and son tale of redemption and never giving up on one's dreams. It's cardinal sin, however, is that it's almost unbearably dull.

"I Can Only Imagine" was a monster hit for the Christian band MercyMe in 2001, rocketing the top of the charts, and crossing over to secular radio stations, eventually going on to be certified triple platinum. The film focuses on songwriter Bart Millard (J Michael Finley) and the relationship with his abusive father (Dennis Quaid) that inspired the popular song. Despite the fact that it's a true story, the plot is a familiar one, seemingly lifted from every musical biopic ever made, only minus the drug use, sex, and cursing. Millard's father tells him not to pursue his dreams, Millard does it anyway, and achieves astronomical success, before finally reconciling with the man who tried to hold him back.

It's an undeniably inspiring tale, but the execution is about as cinematically uninteresting as they come, and there's not a moment here that filmmakers Andrew and Jon Erwin don't overplay for maximum tear-jerking effect. If the sniffling in the crowd at my screening was any indication, it's clearly working (the film has been a surprise box office success this weekend), but I found its well-intentioned wholesomeness to be generic and blandly conceived.

The fact that Finley plays Mallard as both an adult and a high schooler is also a grave misstep, even though the screenplay makes a weak attempt to poke fun at the situation by having a character joke that his beard "makes him look 35." Unfortunately, the joke doesn't make it any less awkward, and the film suffers as a result from having a character that's supposed to be a teenager look like Seth Rogen. The casting of country singer Trace Adkins as MercyMe's gruff manager, Brickell, proves to be its smartest move, and Adkins proves to be the film's biggest bright spot, injecting a sense of playful levity when things threaten to become too saccharine.

Thankfully, I Can Only Imagine doesn't feel like a Sunday school lesson, but it never manages to escape its sense of banal familiarity, playing the hits to a receptive crowd but never really bothering to dig beneath the surface of its narrative. It's a pretty but flat story with a greeting card ready message that's just not interesting enough to justify a feature length film.