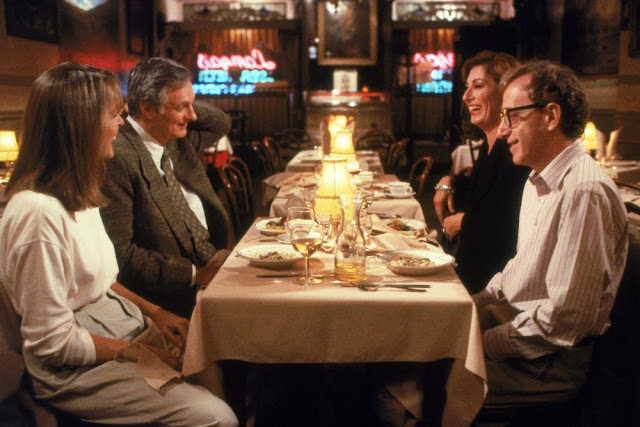 Following a bitter divorce from Mia Farrow, Woody Allen made a celebrated return to comedy in 1993's Manhattan Murder Mystery, an almost 180 degree turn from his previous film, 1992's acidic Husbands and Wives, which ended up being the final film in his 10-year collaboration with Farrow. His relationship with Farrow resulted in 13 films between 1982 and 1992, a period of time that is arguably one of the richest of his long career.

Now without his muse, he turned to one of his oldest friends and collaborators, Diane Keaton, to step into Farrow's role reuniting with her Annie Hall director and co-star, as well as co-writer Marshall Brickman. The result is one of Allen's most purely enjoyable films, a playful riff on Hitchcock's Rear Window about a pair of New Yorkers who begin to suspect that their elderly neighbor is a murderer. 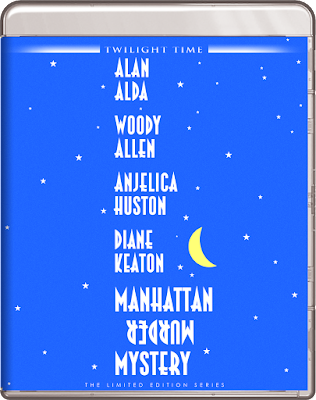 Keaton and Allen star as middle-aged Manhattanites, Carol and Larry Tipton, who one day after meeting them for the first time, discover their their elderly next door neighbor, Mrs. House (Lynn Cohen) died suddenly of a heart attack. When her husband, Paul (Jerry Adler), doesn't seem to be that upset, Carol becomes suspicious, and begins to snoop around his apartment for evidence to support her theory. Larry is mortified, but their recently divorced friend, Ted (Alan Alda), who has always had a bit of a crush on Carol, is intrigued, and begins to help in her investigation. Even one of Larry's literary clients, the brilliant and sensuous Marcia Fox (Anjelica Huston), joins in on the fun, much to Carol's chagrin. They soon find themselves in over their heads, but they have a blast solving the mystery anyway.

Manhattan Murder Mystery is one of those "you're never too old to have fun" films, where four people who thought adventure had passed them by get the chance to have some unexpected excitement in their lives. Many of Allen's films during the previous decades were inspired by the work of other artists (Bergman, Checkhov, Cassavetes, German Expressionists), and while his cribbing of Rear Window is obvious, Allen makes it more his own, toying with a few Hitchcockian techniques (the bravura final sequence in a room full of mirrors is expertly executed), but this is an Allen comedy through-and-through. His characters sit around tables and rattle through neurotic dialogue that flies so freely it almost seems improvised, if it weren't for that particular Allen timbre that makes his dialogue sing.

Allen seems strangely refreshed here, and everyone involved is clearly having a blast. It feels like a palate cleanser for his acerbic divorce with Farrow, and as such is probably one of the most creatively successful films of his career, right up there with Annie Hall and The Purple Rose of Cairo in terms of sheer entertainment value. The new Blu-Ray from Twilight Time is disarmingly beautiful. It may not be the most visually striking film of Allen's career, but the new Blu-Ray is crystal clear, offering true, inky blacks free of the usual excessive grain and damage one would expect of a film from this era. It's a lovely presentation of a charming film, a continually effervescent delight that showcases Allen at his most carefree and fun.