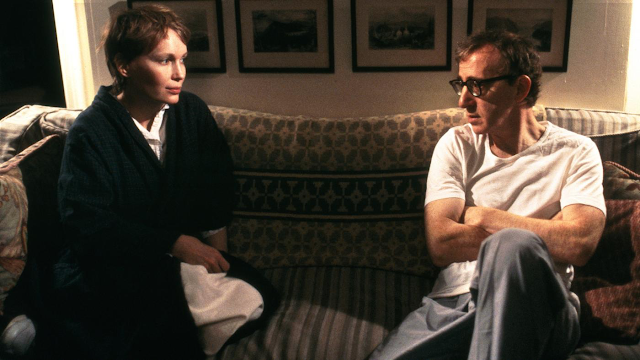 Woody Allen's Husbands and Wives is not an easy film to watch. It was the final of Allen's 13 collaborations with Mia Farrow, and their relationship dissolved before filming was complete. Watching the film with knowledge of the scandal that drove them apart makes the film all the more difficult. It's a powder keg of emotions, one of Allen's most raw and angry films, brimming with bitterness and acrimony that seems to radiate right off the screen. 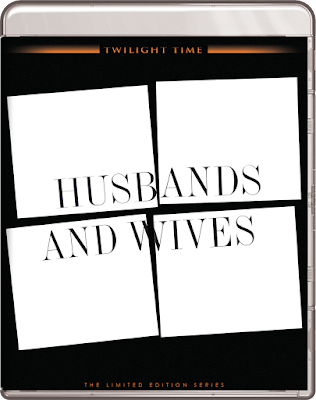 While Farrow's character was not based on her (Allen originally intended her for Judy Davis' part), one can't help but feel as if both Allen and Farrow used the film as an outlet for their own pain. As we know now, there was never any real catharsis for either of them, and as such, Husbands and Wives feels like an exposed nerve. The film centers around two middle aged couples, both longtime friends. When Jack (Sidney Pollack) and Sally (Davis) casually announce their separation, it throws Gabe (Allen) and Judy (Farrow) into a tailspin, popping the bubble of Judy's seemingly idyllic existence and forcing her to examine her own marriage.

As Gabe and Judy begin to see other people, causing additional friction and jealousy between them, Judy also becomes an object of the affections of  a handsome co-worker (Liam Neeson) she set up with Sally, while Gabe, a college professor, becomes infatuated with one of his students (Juliette Lewis). The ensuing entanglements, arguments, and spousal manipulation results all four of them trying to tear each other down, unable to see the damage they're doing right before their eyes.

Allen directs the film almost like a documentary, employing Nouvelle Vague style jump cuts, hand held cinematography, and narration from the characters and their never seen therapist (played by costume designer Jeffrey Kurland). It's one of Allen's most formally daring works, and it perfectly conveys the anger and confusion at the root of the film. It eventually loses its way somewhat, lost in a torrent of boiling resentment from which it never quite recovers, but what a fascinating and compelling work it is, like a car crash from which you can't look away.

The next year Allen would cleanse his palate (and his soul) with one his finest films, the lighthearted Hitchcock riff, Manhattan Murder Mystery. But here we are given a shockingly frank look at the dissolution of not just a romantic relationship, but of an artistic partnership. While the film isn't necessarily autobiographical in anyway, it's impossible not to feel both Allen and Farrow pouring their rage into their work. If it's not a reflection of their actual relationship, it's at least a reflection of their feelings about it. As such, Husbands and Wives is a film that is impossible to separate from their own story, and it never escapes the feeling that we're eavesdropping on something we shouldn't see, being played out for all the world.