OK, I've decided that I have changed my mind about Clint Eastwood's song that plays over the end credits of Gran Torino. 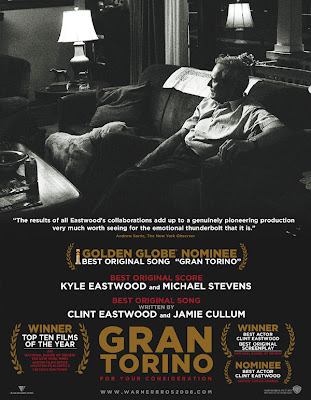 Eastwood may have a gravelly voice, hell he may not even be a very good singer, but there's just something about it that grows on you. It really works in context, and Jamie Cullum's vocals really give it wings later on.

Maybe it's just my love for the film that made me reconsider how I felt about it. It's got that kind of smooth, jazz club vibe to it that I really like, and when you add that to just how much I really love this film, and it's a winner. I don't care what anyone says about Eastwood's singing. It works wonders in context, driving straight for the heart. And that's what really counts. I have found myself revisiting the song more often than I would have imagined the first time I heard it, and remembering what it was that made me fall in love with the film in the first place.

I think it's about time he was recognized in a music category, he's been recognized everywhere else. This is probably the best shot he's ever had.

Daniel said…
I agree about Jamie Cullum saving that song. I haven't heard it since, but ugh, Eastwood's voice never warmed for me.
11:27 AM