Ed Zwick certainly has a flair for the dramatic, doesn't he? 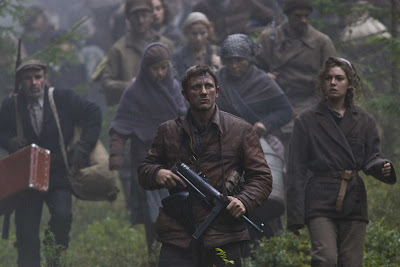 He always tends to go for the melodramatic instead of the subtle, but I think there's always a place for films like this every now and then. Defiance is a well made piece of middle brow Oscar season fare. It's often quite shameless, yes, but I thoroughly enjoyed it. I read somewhere where someone referred to it as James Bond meets Schindler's List, which is pretty apt I think.

I didn't find it particularly emotionally involving, it doesn't have the same gravity of a Schindler's List or a Pianist, but the production values are high and more often than not it's actually pretty compelling. It's not your typical Holocaust movie, even if it does it a few familiar notes (Zwick's love of slow motion action sequences is in full display here). I fully expect an Oscar nomination for Best Cinematography, and more than likely one for James Newton Howard's beautiful score. I wouldn't be surprised to see it pop up in one or both of the sound categories, but I think that will be the extent of its Oscar success.