Carlos Reygadas' brilliant, magisterial Silent Light, which I recently named as the best film of 2008, is now playing at New York's Film Forum until January 20. 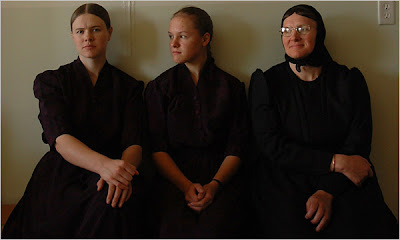 This probably puts it in a similarly precarious position as 4 Months, 3 Weeks, and 2 Days about whether it is a 2008 or 2009, but I stand by my decision to place it in 2008 after its brief run at MOMA last year.

Apparently the film is getting mixed reactions from audiences, according to a letter posted over at Hollywood Elsewhere, which is to be expected I would think. It's most definitely not a film for all tastes and requires a great deal of patience and investment on the part of the audience, but it is so rewarding. The slow, deliberate pace makes the film almost like a meditation, and that should definitely be prepared for before seeing it. The result is something akin to a spiritual experience, but it requires a certain frame of mind. However, for those of you in New York, it comes highly recommended.

The film will be showing concurrent with Kelly Reichhardt's quietly devastating Wendy and Lucy. Not exactly the best double feature, but both are excellent films.
Email Post