"Get Out of My Theater!"

No this isn't a story about the guy who shot a noisy talker in a screening of The Curious Case of Benjamin Button last month. It's about this weekend's box office, which was supposed to end with a Bride Wars victory. 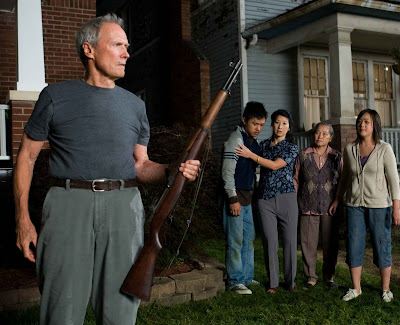 Not anymore. Clint Eastwood's Gran Torino opened wide to a $10 million haul yesterday, compared to Bride Wars $7.5 million. Torino looks to finish the weekend with $30 million, according to Big Hollywood's Steve Mason (formerly of Fantasy Moguls), while Bride Wars will finish with $21.28 million. That will bring Torino's total gross to $41 million after several weeks in limited release.

That is great news. Not only is Clint Eastwood still beating the competition, but one of the best films of 2008 is wiping the floor with one of the first insipid comedies of 2009. This kind of repudiation of stupidity doesn't happen often, and is worth celebrating. Congratulations, Mr. Eastwood. You earned it.
Email Post

Coleman's Corner in Cinema... said…
There is something about Gran Torino that people are responding to. It's a portrait of today, with an old man coming to terms with it. Eastwood looks shockingly prescient in so much of its making; from his past as a Detroit autoworker to the film's blatant dealing with race relations just as the country is about to swear in its first minority president.

I could tell by the audience reaction when I saw it. This film will have legs, I thought to myself. Sounds like I was proven correct.
2:58 PM